March for Choice: ‘Free, safe, legal’ is the slogan as thousands muster in Dublin 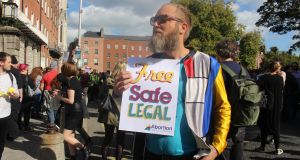 Abortion is a black and white issue. Those Repeal jumpers, designed in anger last year by campaigner Anna Cosgrave, have become a ubiquitous fashion and political statement.

On Saturday lunchtime there were thousands of them in evidence. Those elemental colours, symbolising darkness and light, stood out against the bright shafts of sunlight glinting on the ornamental pool in the Garden of Remembrance on Parnell Square in Dublin.

The sixth annual March for Choice may be the last. Campaigners will get their referendum on the Eighth Amendment next summer as promised by Taoiseach Leo Varadkar, but those gathered in Parnell Square wanted a clear choice.

“I’ll tell you what I want, what I really, really want,” sang the Voices for Choice choir reworking the Spice Girls standard Wannabe into Wanna Choice.

“Free, safe, legal” was the answer and the pithy slogan emblazoned on hundreds of posters.

The demographic was mostly young women in their 20s and 30s, though not exclusively.

Tim Redfern (48), who carried a “free, safe legal” poster, described the Eighth Amendment as a “weeping sore”. Who were men to tell women what to do with their bodies, he asked.

Few of those present had a vote in 1983 when the Eighth Amendment was passed.

Olga Estridge (62) and her friend Irene Shelly (57) were exceptions. For Ms Shelly it was time for Irish society to take responsibility. “My kids are 30 and 33,” she said. “I’ve always believed that if you want an abortion, why should you go to England for it?” she said.

She looked around at the sea of young faces assembling for the march. “It’s their future. I’m beyond childrearing.”

Glen Lecky and his wife Aine brought their children Julie (10) and Eoin (8) from Mayo for the event. “I know from my parents that they are pro-choice,” Mr Lecky said. “They don’t necessarily agree with abortion, but they accept people’s rights to make their own decisions.”

Sinead Redmond of Parents for Choice brought her two children Alva (4) and Etáin (1). She was one of the organisers of the first march in 2012. “We knew it would be this big,” she said, as those towards the back of the crowd waited patiently to move off.

All present said this was the biggest march to date. Because of Luas works, the crowd took a left at the top of O’Connell Street instead of going straight on. The march provided quite a spectacle as it snaked around Liberty Hall and over Butt Bridge. Many participants broke off to take photographs. Others peeled away, having made their point.

At Merrion Square, Nell McCafferty and Bernadette Devlin McAliskey, two veterans of a lifetime of campaigning on various issues, chatted while waiting for the crowds to arrive.

Ms McCafferty had been a critic of how previous marches were run. She was pleased to see there would be enough loudspeakers this time around, but still no provision for people with limited mobility. “God bless the pro-life. At least they’d give you a seat,” she said, leaning on her walking stick.

She had read that one of the chants that would feature on the march was “Leo, Leo, fuck your socks” and fretted that those who are pro-choice would blow the prospect of success in the referendum through such juvenile antics. “I don’t think that’s radical. I think that’s a turn-off.”

The crowd approached the stage at the north side of Merrion Square like a swelling tide to the sound of the Voices for Choice choir singing an adopted version of the 4 Non Blondes’ What’s Up? “I said hey,” the crowd sang along “repeal the Eighth”.

Organisers claimed a crowd of 30,000 attended the march. The Crowdsize app estimates that a full northern end of Merrion Square takes 15,000.

By the time the speeches started, the crowd had dissipated. The square was half full.

At one end, speakers enunciated on familiar themes, while at the other end a party was going on. A group of students sang and danced to Abba’s Dancing Queen on the steps of one of the handsome Georgian buildings.

They felt no need to listen to the speeches. They had heard it all before. Haven’t we all?