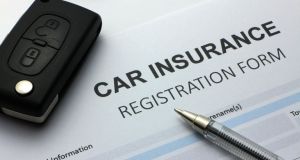 The Government has been accused of taking its foot off the pedal when dealing with high-priced motor insurance as premiums now cost an average of 30 per cent more than three years ago.

AA Ireland, one of Ireland’s largest insurers, said motorists were increasingly troubled by premium prices with over 75 per cent of 4,000 people polled in recent weeks saying their level of concern had risen since last year.

“The story of high insurance costs isn’t a new one, but it is an issue which has fallen off the priority list at Leinster House,” the AA’s director of consumer affairs, Conor Faughnan, said.

“Ultimately, while the significant annual increases that many people were seeing in 2015 and 2016 have largely eased, the majority of motorists are still paying more for their cover than they would have in previous years,” he said.

He accepted that the Government was juggling many issues ranging from Brexit to homelessness but said it could not simply “ignore the issue of insurance costs or see it as a battle won just because fewer people are getting a jaw-dropping increase when their renewal notice arrives”.

He said despite falls in insurance costs reported by the Central Statistics Office, the average motorist still pays about 30 per cent more than in 2015.

“The actions that Government need to take to ease the burden have been highlighted routinely and, in fact, many of the recommendations in the Cost of Insurance Working Group’s report reflected the suggestions of the AA and other organisations.

“Unfortunately, since the report’s publication we haven’t seen enough follow through and it appears that the report is now simply gathering dust on a shelf somewhere in the Department of Finance. ”

The high price of car insurance is not the only thing adding to motorists’ costs as fuel prices are now at their highest level in three years.

The pricing website pumps.ie has put the average cost of a litre of petrol at €1.46 with the price of a litre of diesel now standing at €1.35. Among the key contributors to rising prices at the pump has been the volatile nature of the cost of a barrel of crude oil throughout this year.