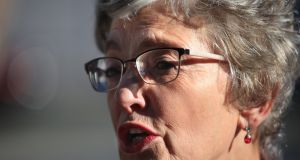 Handcuffs were used on five children by staff members at Oberstown detention centre for purposes other than attendance at court, a report from the health watchdog says.

The Health Information and Quality Authority (Hiqa) said three children had been apprehended following attempted escapes and the handcuffs were removed upon re-admission to the unit.

Two children were handcuffed following incidents; in one case to assist staff members complete a room search and in another to allow the child outside for fresh air.

The data relating to the use of handcuffs was provided by Oberstown to Hiqa inspectors and related to the 12 months prior to the inspection in March 2018.

Hiqa inspectors said they reviewed three records where the use of handcuffs was recorded as being required for children’s attendance at court.

“Inspectors found in each case these records did not provide sufficient details in relation to the use of handcuffs, other than noting it was due to a child’s court attendance,” the report said.

“Records did not indicate duration of use of handcuffs, authorisations for use and when the handcuffs were removed and returned, making it very difficult to effectively monitor their appropriate use.”

Inspectors noted that it was acknowledged records on the use of handcuffs required further improvement and plans to address deficits “were in the process of being developed at the time of inspection”.

Inspectors also noted there was CCTV being used in the room where children were being subjected to an “admission process” whereby they were searched upon admission or re-admission to ensure they were not concealing any dangerous or prohibited items or substances. This process involved a child undressing, and covering themselves with a towel or dressing gown.

“Inspectors noted that while every effort was made by staff completing the admissions process to ensure, in as far as possible, that the dignity and privacy of children was respected, consideration had not been given to the images visible on monitors within communal staff offices, which meant that they were visible to care staff, and other professionals who may be in the staff room at the time of the search,” the report said.

Data provided to inspectors by Oberstown indicated there were 38 child protection and welfare concerns or allegations made by children since March 2017 – 25 of which were reported to Tusla and An Garda Síochána.

These included concerns relating to retrospective allegations of abuse, allegations of abuse which occurred on the campus and/or during approved absences from campus. Inspectors reviewed a sample of these child protection records and found that there was “very limited or no follow-up information on file”.

“Acknowledgments of receipt of these child-protection concerns were often delayed or not received from Tusla,” it said.

Inspectors found there was “limited or no information available” to children and/or staff in relation to transferring from Oberstown at the age of 18 to the Irish Prison Service.

“There was uncertainty about the prison to which they were transferring or what to expect upon transfer,” the report said.

“Therefore there were limited opportunities to support and prepare children which was a cause of apprehension for those concerned.”

An action plan has been published by Oberstown based on Hiqa’s findings.

“I am pleased to see that an action plan has been agreed to address any deficiencies in practice,” she said.

Oberstown Director Pat Bergin said much of its action plan is already under way and in place.

“We continue to work to ensure that all our practices are in line with national and international standards, and we are pleased that today’s Hiqa report documents significant improvement in terms of care of children, children’s rights, safety and security, health and education,” he said.