A galaxy far away: new mobile observatory for Kerry 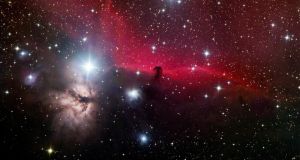 The Horsehead Nebula, as observed from the Kerry International Dark-Sky Reserve, one of only three dark-sky reserves in the world. Photograph: George Doyle.

Plans for a once-off mobile observatory, the first of its kind in Europe, are under way in Kerry. The observatory would operate day and night in all weathers, and could be moved throughout the 700sq km Kerry International Dark-Sky Reserve.

While thousands of tourists arrive to catch a glimpse of the jagged monastic island of Skellig Michael because of its role as a location for the Star Wars films, hundreds are now also feeling the force of the Skelligs area because of its status as an international gold-standard dark-sky reserve – the only one in the northern hemisphere, and one of only three in the world.

It received the accreditation in early 2014 from the International Dark Sky Association, based in the US, after submissions by local astronomer Julie Ormonde, who is based in Waterville.

Backed by mountains and stretching towards the sea, the area from Kells Bay to Sneem and out into the Atlantic as far as Skellig Michael, the Kerry International Dark-Sky Reserve has rare night-sky clarity and is the least light-polluted in the world, the association found.

Now a high-tech all-weather mobile observatory is under way, with UCC’s department of physics, the European Space Agency and the Irish Astronomical Society all making an input.

The national tourism agency Fáilte Ireland is promoting it too, as it says astrotourism is a growing area, with more city-dwellers wanting to see the constellations.

The tourism section of Kerry County Council has set the provision of a mobile planetarium as “a key objective” to achieve before 2022.

There had been plans for permanent planetariums in Valentia Island at the end of the Iveragh peninsula and along south Kerry. However, the benefit of a mobile observatory was that it would move around from Portmagee to Kells to Knightstown and thus be cost-effective, according to Steve Lynott and other locals who are helping to develop the dark-sky reserve.

“There is growing awareness of the whole dark-sky thing, of eliminating light pollution and such,” said Mr Lynott.

There is no major city or town in that part of south Kerry, only ocean and sky, and it is “a pristine environment” for observing the skies, he said.

UCC-accredited weekend courses introducing astronomy and involving archaeology have been held this year on Valentia island.

On March 25th and 26th, a weekend of a new moon, the reserve played host to 160 international stargazers for a “Messier Marathon” – an attempt to log all 110 planetary objects catalogued by the French astronomer Charles Messier in the 1700s.

Council executives announced the council’s involvement in the observatory in a short report to council members this week. It will be able “to operate in all weathers and during the day as well”.

“It will be the only such facility in Europe and give the Kerry dark-sky reserve an advantage over competitor astro-tourism destinations,” the council said.

Exactly what the mobile planetarium will look like has not yet been fully determined, but it will be more than the average rural library van. The next stage is a detailed design of the vehicle, business plan and application for grant support.

“The concept would be similar to a tour bus with an extending body and a sliding roof. When parked it would be locked to ground for stability while using telescopes and it would have audio-visual and remote wifi access to online scopes and activities. Attendees would enjoy an ability to sit in a modern vehicle while experiencing presentations on the dark-sky environment,” Mr Lynott said.