€21,000 redundancy for former barman at Kielys of Donnybrook 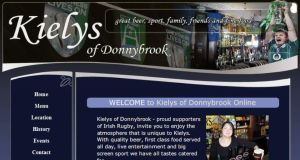 The Kielys of Donnybrook homepage.

A former assistant bar manager at Kiely’s in Donnybrook has been awarded €21,000 in redundancy money by the Employment Appeals Tribunal.

Father of two John Gallagher (43), from Ballinteer in Dublin, who had worked in Kiely’s since 1989, claimed his hours were reduced from five days a week to two in August 2012, as work was directed to the family of owner Mary Cremin.

Mr Gallagher’s solicitor, Jamie Sherry of Business and Commercial Solicitors, told the tribunal Mr Gallagher held a senior position and frequently worked more than 40 hours a week, but was paid for just 40.

He said Mr Gallagher was a keyholder who was required to lock up when the pub closed, but was told he would be better off looking for another job.

Mr Sherry said Mr Gallagher had been promised redundancy, but this was never paid.

Mr Sherry said his client would have been a well-known man in the licensed industry in Dublin and had been able to secure a new position with publican Charlie Chawke’s pub, Searsons of Baggott Street, by October of that year.

However, after a number of contacts with Ms Cremin and her husband Pat, the major shareholders in Donnybrook Inns Ltd - the company which controlled Kiely’s - Mr Gallagher’s redundancy remained unpaid.

Mr Gallagher claimed he was given various excuses including that the company accountants were on holidays, but had a chance meeting with one of the accountants who told him this was not the case.

Counsel for Donnybrook Inns, Francis Drumm, said seasonality had crept into the licensed business and Mr Gallagher’s hours had been altered on a number of occasions including January, November and August 2012.

He said the “plain fact” was that Mr Gallagher had taken the opportunity to get another job after his hours were reduced, and had resigned his position in Kiely’s.

Mr Drumm told the tribunal there had been a big party in Wong’s Restaurant after which all the staff had gone back to Kiely’s and remained there “until five o’clock in the morning”. But he said Mr Gallagher only went as far as Jersey and returned after three months.

Chairman of the tribunal, Dermot Mac Carthy SC, said Mr Gallagher’s contract of employment was altered significantly and it had been up to Mr Gallagher to accept that or to repudiate it and resign, claiming redundancy.

He said he would discount the first six years as of 1989, because of the break in service in 1995, and said Mr Gallagher was entitled to claim redundancy payments as of 1995.

He calculated Mr Gallagher was entitled to 35 weeks’ pay at the maximum allowable rate of €600 per week.