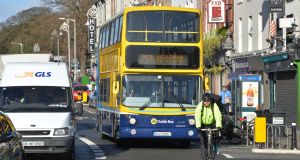 Continuous bus corridors with segregated cycling facilities are to be introduced on 17 major bus routes in Dublin as part of a more than €1 billion upgrade of Dublin Bus.

The National Transport Authority (NTA) plans to overhaul the capital’s bus service with a reorganisation of existing routes; the implementation of a cashless payment system; simplification of the fare structure, to allow movement between different transport services without financial penalty; as well as the segregation of buses from general traffic on the busiest routes to and around the city.

Described by the NTA as “next generation” bus corridors, 11 radial bus routes, three Bus Rapid Transit (BRT) routes, and three orbital bus corridors are to be upgraded so that each will have continuous bus priority to “remove the current delays and uncertainties” in the service, the NTA said.

At present, these busy bus routes only have dedicated bus lanes along less than one third of their lengths. This means that for most of the journey, buses are competing for space with general traffic and are being hit by the increasing levels of congestion.

The corridors will have a continuous bus lane in each direction, and cyclists will for the most part be taken out of the bus lane and have their own segregated path, separated from both buses and cars.

In some instances this will require a widening of the road and “changes to parking arrangements”, the NTA said.

The 11 radial routes from the suburbs to the city centre are on some of the most congested commuter routes such as the corridors from Bray along the N11, from Dún Laoghaire and Blackrock, from Finglas, Ballymun and Cabra though Phibsborough, and from Lucan, Liexlip, Ballyfermot, Clondalkin, Rathfarnham, and Ringsend.

On three routes where passenger numbers are approaching the limits of conventional bus route capacity the BRT system will be introduced.

These high capacity services, first announced three years ago involve the use of longer buses with several entrances, carrying more passengers with stops spaced further apart than on conventional bus routes. BRT routes would run from Blanchardstown to UCD, Clongriffin to Tallaght, and Swords to City Centre.

Finally the orbital routes, which avoid the city centre, will run from Ranelagh to Drumcondra via Heuston Station; Dun Laoghaire to Baldoyle via Dundrum, Ballyfermot and Finglas; and UCD to Blanchardstown via Dundrum, Tallaght and Liffey Valley.

In addition, the NTA has already commissioned consultants to undertake a complete reorganisation of the Dublin Bus network, which could see old bus routes axed and new ones introduced .

The redesign has been sought to reflect the major transport changes in the city including the introduction later this year of the Luas Cross city line, the opening of the Phoenix Park Tunnel, as well as recent and upcoming changes to the road network.

The overall Bus Connects programme, which will also include better bus stop information and new livery for all buses, and park-and-ride facilities, has yet to be fully costed but is expected to be in excess of €1 billion.

The reorganisation of routes will be introduced from next year, but the segregated bus corridors will require planning permission and are likely to take two to two and a half years to implement.

Coronavirus: 306 new cases and one further death reported by Nphet 18:02
Pat Finucane murder: British government will not establish public inquiry 18:07
Seventeen life-sentence prisoners released last year 17:41
Man who stole more than €95,000 in social welfare under false names jailed 17:30
Three jailed over refusal to pledge to stay away from farm to remain in prison 17:20