10 years on: The ceremony that ‘marked the end of the Troubles’

Images of old enemies sitting together beamed around world

Belfast, May 8th 2007: The Rev Ian Paisley and Martin McGuinness are sworn in as First and Deputy First Ministers following a deal struck between the DUP and Sinn Féin. 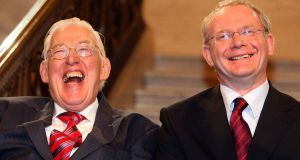 “Stormont ceremony marks end of Northern Ireland conflict”. This definitive headline topped the front page of The Irish Times 10 years ago today, on Tuesday, May 8th, 2007. As the main parties in Northern Ireland formally agreed to work together for the first time in a new Northern Executive, the tone was positive.

“The Rev Ian Paisley and Martin McGuinness today mark the end of almost four decades of bitter and bloody conflict in Northern Ireland when they are formally appointed first minister and deputy first minister,” reads the introduction to the front page news piece, written by Northern Editor Gerry Moriarty and Deaglán De Bréadún.

“This will be the first time that Northern Ireland will be run by a government in which all the main nationalist and unionist parties have agreed to operate power together.”

Written ahead of time and published on the morning of the event, the morning edition lacked live photographs, but at the top of page six sits a photo of Ian Paisley and Gerry Adams, taken some six weeks beforehand at a press conference on March 26th, at which they announced the decision to share power. The significance of that photograph is not missed by Moriarty in his accompanying analysis.

“Much of the talk was of that photograph. Ian Paisley and Gerry Adams and their teams would sit at a table opposite each other, said the DUP. No, side by side, said Sinn Féin. How about both sides converging at the apex of two sides of a square table, it was suggested. Okay, said the DUP, with Paisley and Adams in the middle of each group,” he wrote.

“No, said Sinn Féin, with Paisley and Adams each side of the apex. Which was how we got that picture on the Monday, plus the generous Paisley and Adams statements that told the world that a 40-year-old, bitter, murderous conflict was over, and that set up today as a genuinely momentous day in modern Irish history.”

The next morning, May 9th, the event was over and the live photographs, statements and reaction pieces were in. A photograph of the new first minister and deputy first minister laughing accompanied the front page headline: “Paisley and McGuinness pledge to govern for a better future”.

On page 10, the overview by the Northern Editor concluded: “It was indeed a big day, but in deference to the dead and scarred and in anticipation of the hard work ahead, it was an understated occasion that indicated a real possibility as the Taoiseach (Bertie Ahern) said, of a ‘new era of mutual respect and peace’.”

On the opposite page, the inaugural speeches from Mr Paisley and Mr McGuinness ran in full. “How good it will be to be part of a wonderful healing in our province. Today we have begun to plant and we await the harvest,” said Mr Paisley, while Mr McGuinness said “. . . we must overcome the difficulties which we face in order to achieve our goals and seize the opportunities that exist. This, and future generations expect and deserve no less from us.”

Reaction from then British prime minister Tony Blair features on the same page, as do positive comments from Mary McAleese, with the president praising “two extraordinary leaders”, but also recalling the suffering of victims of the Troubles. This was a common feature of the general reaction in the paper at the time - a feeling of relief at the prospect of peace and sorrow for those already killed or bereaved.

A statement from Mr Ahern printed on page 10 said: “We cannot undo our sad and turbulent past. And none of us can forget the many victims of the Troubles.

“But we can, and are, shaping our future in a new and better way. And in doing so, we can put the divisions of the past behind us forever.”