The Air Corps were called in over the weekend to help battle the gorse fires on the Ox mountains in Co. Sligo using a Bambi Bucket which contains 1,000 litres of water and can be dropped accurately on the flames at a time. Video: Irish Air Corps 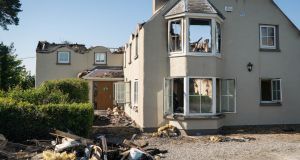 The house destroyed by fire at Kiltimagh, Co Mayo. The blaze caught hold on Friday afternoon last after flaming embers carried on the wind from roadside trees landed on the roof. Photograph: Keith Heneghan/Phocus

A Mayo family of five is homeless following a weekend gorse and forestry fire that destroyed their two-storey thatched home.

Firemen and neighbours with hoses and buckets of water were unable to prevent the roof of Noel and Bernice Brennan’s house near Kiltimagh, catching fire. The blaze caught hold on Friday afternoon last after flaming embers carried on the wind from roadside trees landed on the roof.

As she hugged her youngest Michael (3) on Sunday, a still shocked Bernice said: “It [the fire] started a mile or more away from our house. The flames came closer and closer. The wind changed direction. I phoned for extra fire brigade units after roadside trees exploded into flames. It was frightening. All the village was out trying to stop the fire spreading.

“I was outside the house with Michael trying to wet the grass in front of the house just in case ... I did not know what to do.”

After spotting what she described as “small pockets of fire” on the thatch, the Brennans grabbed a handful of essential belongings.

The Brennans, who have two other children, Maria (8) and Aoife (5), bought the house in 2012 and invested much time, effort and money into improvements and maintenance.

Following the fire, which led to the roof collapsing into the interior of the house, the family had to prepare for Maria’s First Communion celebration on Saturday. Neighbours have set up a support fund to assist the family who have been staying with relatives since Friday.

Units of Mayo Fire Brigade, which fought the blaze, were hampered in their work by a lack of local water sources. Water had to be ferried by special tanker to the blaze location – a rural area about three miles from Kiltimagh.

Mr Murphy repeated an earlier call for the public to exercise extreme caution with matches and lighters in the countryside.

Mayo Fire Brigade had its busiest weekend of the year dealing with gorse and heather fires in a number of locations.

Meanwhile the Northern Ireland Fire and Rescue Service on Sunday evening was continuing to deal with a gorse fire in Co Tyrone spread across a 5km area.

The service said it was dealing with a large wildland fire in the Fivemiletown area. “We have eight appliances and 45 firefighters tackling this blaze in difficult conditions. We believe this fire was started deliberately, which is reckless and puts at risk the public and the environment,” said a spokesman.

Crews from the South also were assisting in tackling the fire.

The service said that since May 1st it had dealt with 460 gorse fires, 80 per cent of which were deliberate.

The spokesman appealed to the public to be vigilant and take care while out in the countryside.

“Gorse and wildland fires traditionally occur in remote areas and are extremely challenging. Our crews have been working tirelessly to bring under control and extinguish these fires,” he said.

He urged anyone with information about who was starting the fires to bring it to the PSNI.