£1,000 pay rise for NI politicians a ‘slap in the face’ for workers

MLAs, recently back at Stormont after three year hiatus, benefitting from 2016 measure 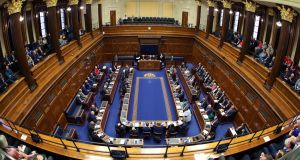 Members of the recently restored North Ireland Assembly are to receive a pay rise of £1,000. Photograph: EPA/Kelvin Boyes/Presseye.

Members of the recently restored North Ireland Assembly are to receive a pay rise of £1,000, with one of the beneficiaries of the raise describing the news as a “slap in the face” for public servants.

The increase was suspended while Northern Ireland’s powersharing government failed to sit for almost three years, but the restoration of the Assembly this month means MLA salaries will rise from £49,500 to £50,500 per year.

An Assembly spokesman said that following the formation of an Executive on January 11th “the full provisions of the Assembly Members (Salaries and Expenses) Determination (Northern Ireland) 2016 are in effect, including the provisions for an annual uprating.

“The annual uprating, provided for in paragraph 3, has been applied. The current annual salary payable as a Member is £50,500,” she said.

The pay increase was criticised by People Before Profit MLA Gerry Carroll, who said “the fact that MLAs are back in post just over a week and are having their wages topped up will no doubt come as a slap in the face to nurses who stood on freezing pickets for months for pay parity, and the civil service staff who are still taking industrial action to get what they deserve”.

“People Before Profit have always advocated for MLAs to be paid an average worker’s wage - it’s what I take home,” the Belfast West representative said.

“How can MLAs receive a salary that is around double the average wage and claim to competently represent their constituents interests when their financial realities are so different?”