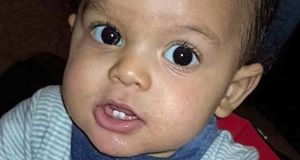 A man charged with murdering a baby in Co Armagh left the child alone for hours while he visited a casino, the high court in Belfast heard on Tuesday.

Prosecutors also alleged Sharyar Ali went out in the middle of the night for a second time when he was supposed to be looking after 11-month old Hunter McGleenon.

The little boy’s “lifeless” body was discovered later on November 26th last year when paramedics were called to a house in Keady.

Examinations established that he had sustained head and abdominal injuries.

Mr Ali, a 31-year-old Pakistani national of Westenra Terrace in Monaghan, was in a relationship with the baby’s mother at the time.

Hunter had been left in his sole care from the previous day while she spent time with her terminally ill grandmother.

The court heard he made a number of trips with the child during that period, including taking him to Monaghan where he runs a mobile phone shop.

Later that evening he brought the boy back to Keady to say goodnight to his mother, with no concerns raised at that stage.

But the following morning, according to Mr Ali’s account, the child rolled off a sofa and banged his head on the ground.

The defendant said he found the boy face down on the floor and put him into a cold shower in a bid to revive him.

When Hunter started to move his arms and clench his mouth Mr Ali said he dressed and put him to bed. Later, however, he said he noticed the baby’s lips had turned blue and brought him round to the house where his mother was staying.

A Crown lawyer insisted his version of events did not explain “multiple” injuries found on several areas of the child’s body.

Mr Ali told detectives that apparent blunt force trauma injuries to the abdomen were due to attempting CPR on the part of the body rather than the chest.

But prosecution counsel contended that he provided contradictory explanations as evidence was put to him in police interviews.

Opposing his application for bail, she went on to detail two separate alleged trips Mr Ali made before the night before Hunter died.

“He left the child alone for a couple of hours while he was in a casino in Castleblayney,” the barrister said. Later, the baby was again left unattended when Ali returned to Monaghan because he was waiting for a delivery, she saud,

“He said he didn’t mention this to police initially because he knew it was inadvisable,” counsel said.

Mr Ali’s wife and brother both attended court for his bid to be released from custody.

During the hearing it emerged that the accused is facing deportation proceedings in the Republic of Ireland. Lord Justice McCloskey was also told he does not have permission to remain in the United Kingdom.

Adjourning the bail application, the judge said he wanted further inquiries made with officials in both jurisdictions.