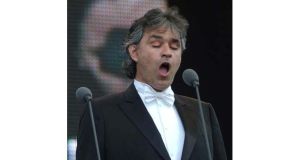 The business community dipped into their big pockets and chipped in about €10 million during the year, writes Mary Leland

'If we want to call ourselves a city, we must have this!" Val O'Connor's recollection of the motivating force behind the invitation to Andrea Bocelli to sing in Cork during the city's year as European Capital of Culture goes beyond what he can now see as an astonishing success - although initially it had an unsettling element of risk, which made it unpopular with Cork businessmen.

His declaration goes to the core meaning of the designation for the city. It also defines a distinction nobody recognised until it became a reef hidden beneath the flow of the published programme: rocks on which the programme itself almost capsized. There is old money in Cork, and there is new money. Val O'Connor, like Peter Barry of Barry's Tea, typifies the old. Nigel O'Mahony, marketing and sponsorship director for Cork 2005, may be a branch of the family tree behind Thomas Crosbie Holdings, but his appeal was to the new wealth.

The composition of the financial resources of Cork 2005 was based on an opening formula of €13.5 million; by bringing that figure to a total expenditure of €21 million, both Cork 2005 and city management can claim a fiscal success, achieved through major partnerships with RTÉ, AIB, Heineken Ireland, the Musgrave Group and Thomas Crosbie Holdings (all meeting the entry criteria of €750,000), through individual event sponsorship, through a heavy loading of benefits in kind and budget-relieving activity and through its long list of corporate membership.

At that, not everything went through the 2005 books: the Frank O'Connor Short Story Award of €50,000, for example, was a cheque written by O'Flynn Construction directly for the winning author. The considerable contribution from the Bowen Group for the James Barry exhibition went directly to the Crawford Gallery.

These and other independent sponsorships bring the total from the business and construction interests in the city to nearer €10 million than the quoted €7.6 million, according to Nigel O'Mahony.

Yet the mid-year crisis in Cork was that the big money expected from the big interests, from the people making millions from their involvement in the city, just wasn't coming in.

City manager Joe Gavin, subsequently publicly criticised for seeming to compromise his position by too close a liaison with property developers, more or less told that coterie what was expected of them, and they more or less delivered.

IT SEEMS LUDICROUS now to remember that they waited to be asked because, to judge by statements from, for example, the Cork Chamber of Commerce, they wanted to be asked. There was some hefty money involved: O'Callaghan Properties not only provided a city-centre information office for Cork 2005 but also gave more than €80,000 for the stunning Salgado photographic exhibition along with grants to other companies estimated to total between €300,000 and €400,000; the Céilí Mór was funded to the tune of €200,000 by Kieran Coughlan; Clayton Love, in the guise of Blackpool Developments, gave another €200,000 to assist Music Migrations among other things; and €500,000 came from a consortium of Ascon Rohcon, Frinilla, the Kenny Group and the Wilton Shopping Centre to pay for the light-themed public diversions of December.

Nigel O'Mahony can explain the delay: "It's not corporate immaturity. Modern marketing demands to be measured, quite rightly, and there's an important distinction between sponsorship and patronage. The standard sponsorship model is very simple, but the idea of a designation is completely different and very difficult both to sell and to buy. Look - the Relocation project was a dream thing to sponsor but it had to be seen to be believed. Telling a marketing director that you're building a ship on the Grand Parade for the Jo Bithume's production of Victor Frankenstein is not like offering the jerseys of the Munster team - although Barry's Tea picked up on that. And The Merchant of Venice was a fabulous event, but if you had described it beforehand would someone have handed over €50,000? So this has been a huge education for the cultural community and the commercial community."

As it happened, no one did hand over €50,000 for The Merchant of Venice, apart from Cork 2005's grant towards the €200,000 estimate, although its less daunting costs were supported by Murray O'Laoire's donation directly to Corcadorca.

And the acclaimed Airgeadóir Cork silver and gold exhibition, mounted by the Bowen Group at the Crawford Gallery, is classed by Cork 2005 as benefit-in-kind - John Bowen being one of those construction industry magnates who preferred not to wait to be asked.

Project Management - again at the Crawford - put Figure and Ground in place. That comes almost under the heading of patronage, defined by Nigel O'Mahony as "a gift arising from civic consciousness and which is its own reward".

But don't these distinctions simply mean that Cork is culturally naive, that we don't know what's being done elsewhere and what it is possible to do here? "It keeps coming back to that - people want to see the evidence first. But it also comes back to another difficulty: the designation itself isn't a brand. The cultural world will say that every capital of culture is different, and that's fine. But I'm looking at it as a product and in my view to have to invent a brand anew with every host city every year is crazy."

One aspect of the early funding problems was that those likely to invest wanted to know what was coming up, while the organisation didn't want to reveal its plans before they were confirmed. Again O'Mahony sees this as a fundamental obstacle to the success of any capital of culture: "It's the same for every location. You don't want to announce the programme too early, but without a programme you can't attract sponsorship. I believe this is something that has to be tackled by Europe itself. The designation is all you're given; it's not like the Olympics, where everyone knows what it is. There's no mechanism to do three-year deals, and sponsors like continuity. Our major partners were the people who were able to say: 'We don't know what it is, but we know it's there and we want to be part of it' - but only a CEO can say that kind of thing."

All the same, there has been a kind of continuity in Cork, and Val O'Connor and his colleagues personify it, belonging as they do to an older Cork that operates according to a familial, cultural and commercial network that it takes time to know - and in this case there wasn't time. It was through that network that the first hint of Bocelli was introduced by Val's son, Finbarr. The O'Connors have been in business in Cork since 1887; a director of Opera 2005, Val's approach to Cork 2005 was both imaginative and practical: "The need for the year was a blue-ribbon fund-raising committee, people ready to put up some money themselves and therefore entitled to ask others to do the same. In our case, once we were convinced that the Bocelli concert was the way to make our contribution to the year we had to hand over €100,000 to his management simply as a guarantee that we were serious."

THE COSTS WERE estimated at €1 million, with Thomas Crosbie Holdings the main sponsors; the result for the organisers was a surplus of more than €100,000, distributed among 10 local charities including the Army Benevolent Fund in recognition of the army's crucial and whole-hearted support at Collins Barracks.

They were able to persuade promoter Jim Aiken to join them, the city manager, Joe Gavin, had all the city council car-parks opened free of charge that night, and the Garda and Bus Éireann and the medical services did everything they could to assist event manager Gar Holohan. They got 10,000 people up into the barracks square to hear the Czech National Orchestra and tenor Andrea Bocelli and soprano Paola Sanguinetti singing on a summer's night.

"And in the end all it cost us was anxiety and hard work," says O'Connor, whose feeling now is that they could have done more. There was a splendour to the city on that Bocelli night, an atmosphere that must have been what had been hoped for from the designation.

"We believed it could be done," says O'Connor. "We went ahead independently of 2005 because this designation was our chance and our belief was that it would never happen again. Perhaps it came too early, perhaps the city wasn't ready for it. But Cork had to play the hand we got, and we were determined to be part of it."