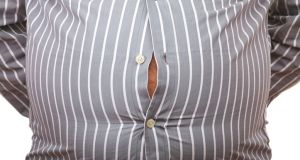 “As well as the medical challenges these people will face, the costs to countries’ health systems will be enormous.”

Almost a quarter of the world’s population will be obese by 2045, according to a new study.

If current trends continue, 22.4 per cent of people globally will be classed as obese, up from 14 per cent in 2017, while one in eight will have type two diabetes, the projections show.

The researchers, from the US, Denmark and University College London in the UK, warn efforts to tackle obesity must be “significantly intensified” to stabilise the growing problem.

The findings will be presented at the European Congress on Obesity in Vienna, Austria.

Their projections, based on analysis of population data from a World Health Organisation database, suggest prevalence of diabetes globally will increase from 9.1 per cent to 11.7 per cent by 2045.

Meanwhile, more than half (55 per cent) of the US population will be obese by 2045 if trends continue, the researchers said.

Dr Alan Moses, of Novo Nordisk Research and Development in Denmark, who will present the study, said: “These numbers underline the staggering challenge the world will face in the future in terms of numbers of people who are obese, or have type two diabetes, or both.

“As well as the medical challenges these people will face, the costs to countries’ health systems will be enormous.

“The global prevalence of obesity and diabetes is projected to increase dramatically unless prevention of obesity is significantly intensified.

“Developing effective global programmes to reduce obesity offer the best opportunity to slow or stabilise the unsustainable prevalence of diabetes.”

The authors suggest that to stop rates of type two diabetes going above 10 per cent in 2045, obesity levels must fall from 14 per cent to 10 per cent in the same period.

Differences in environment and the causes of obesity mean there is no “one-size-fits-all approach” which will work for all countries, Dr Moses said.

He added: “Despite the challenge all countries are facing with obesity and diabetes, the tide can be turned.

“But it will take aggressive and coordinated action to reduce obesity and individual cities should play a key role in confronting the issues around obesity, some of which are common to them all and others that are unique to each of them.”

Around 425 million people are living with diabetes globally, according to the International Diabetes Federation.

Type two diabetes, which is thought to be influenced by factors including genetics and lifestyle, makes up the vast majority of cases. – PA