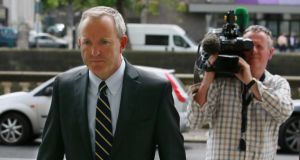 Consultant surgeon Joe McGrath, leaving the Four Courts yesterday after he was issued with an apology from the HSE. Photograph: Collins

Whistleblowers are flavour of the month, but Joe McGrath fulfilled this role in the hospital he works in, Our Lady’s in Navan, years before it was ever popular to do so.

However, in common with other whistleblowers currently in the news McGrath, a consultant surgeon and gastrointestinal specialist, paid a heavy price for his outspokenness.

As far back as 2000, he raised concerns about staffing and resources issues, bed use and the cancellation of procedures at his hospital, highlighting the knock-on effects they had for patient safety.

In 2005, for example, The Irish Times reported the concern of surgeons in the hospital over operating theatres being left uncleaned overnight, causing delays to procedures the following morning.

Hostile response
As the years passed and cutbacks were made, McGrath’s voice grew stronger, and the response of his superiors more hostile.

After 2004, the health services were being run centrally by the Health Service Executive, which responded unfavourably to the negative light being shone on this corner of its empire.

From 2005, the HSE carried out a series of reviews into surgical services at the hospital, with obvious personal, psychological and professional consequences for McGrath. The suffering he endured is explicitly referenced in yesterday’s court apology to the surgeon from the HSE.

In 2007, McGrath sued his employer, but it took seven years for the case to reach the High Court yesterday, when a settlement was announced. During that time, the dispute continued and even intensified, but the wider context in which Navan hospital operates also changed dramatically.

McGrath was placed on administrative leave for a three-month period in 2010 after complaints were made by staff in relation to two operations.

He denied the allegations, but it took three years before two reports effectively cleared him.

It was obvious during that time that he enjoyed widespread support among his medical colleagues – fellow surgeons spoke out on his behalf and 50 Co Meath GPs sent a petition to the HSE calling for his reinstatement.

Hiqa report
Meanwhile, in 2009, the Health Information and Quality Authority (Hiqa) published a report on Ennis hospital recommending its services be reconfigured to make them safer for patients. The report raised serious questions about other smaller hospitals around the country, including Navan.

In the years that followed, many of these Model 2 hospitals ceased providing 24-hour emergency care, surgery and obstetric services. They didn’t lose out entirely, as elective surgery and day procedures were increased.

In Navan, surgery ended in 2010 but the emergency department remains open, despite the HSE’s stated intention to convert it into a minor-injuries unit. Indeed, a new building was erected to house the department.

Hiqa kept up the pressure with a further report, in 2011, which said patients were being put at risk at a number of smaller hospitals by the failure of the HSE to implement its earlier findings.

One by one, each of these hospitals has been downgraded through the curtailment or closure of emergency services, with the exception of Navan.

The threat to Navan remains, and local opposition to further reconfiguration of services remains strong. By coincidence, a day after the settlement in this case, the town’s citizens take to the streets again today in defence of their local hospital.