‘Constant worry of catching Covid was weighing heavily on me,’ Phelan says 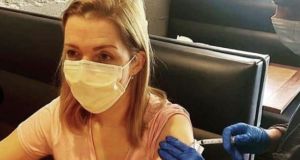 CervicalCheck campaigner Vicky Phelan was vaccinated in Oldtown in Alexandria, Virginia, with the one-shot Johnson and Johnson vaccine

Women’s health advocate and Limerick woman Vicky Phelan, who is undergoing experimental cancer treatment in the United States, has spoken of her relief after receiving the Covid-19 vaccine, after “constant worry of catching Covid”.

Writing on her Facebook page, Vicky’s Tribe, Ms Phelan said she was vaccinated in Oldtown in Alexandria, Virginia, with the one-shot Johnson and Johnson vaccine.

“I am both delighted and relieved to now be vaccinated as the constant worry of catching Covid was weighing heavily on me. Because if I were to catch Covid, I would have to come off my clinical trial and that was simply something that I did not want to happen,” Ms Phelan said.

“So far, so good. I have been very tired today but that could also be because of treatment yesterday.”

Ms Phelan said receiving the vaccine will give her the freedom to be a tourist on the days she is feeling well.

The Kilkenny-born mother of two moved to the US in January for a trial of the cancer treatment M7824 which is expected to last for six months. The trial is being directed by Dr Julius Strauss at the National Institute of Health in Maryland. Ms Phelan is in her sixth round of treatment.

Ms Phelan was diagnosed with cervical cancer in 2014 but was given the all-clear after prolonged and intense treatment.

Three years ago, however, she was informed that an audit carried out by CervicalCheck found that her 2011 smear test had been reported as a false negative.

Within weeks a CT scan revealed the cancer had returned and the diagnosis was terminal. She went public and was awarded €2.5 million in 2018 by the High Court over the missed diagnosis.

Vaccine rollout to be ‘reset, not revamped’ after AstraZeneca decision – Reid