Covid clusters among school children and staff double in a fortnight

Majority of outbreaks occurred in private houses, while 25 reported in vulnerable communities 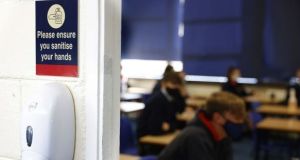 Transmission of Covid-19 within the school has not necessarily been established in these outbreaks. File photograph: Alan Betson

There was a 15 per cent reduction in the number of Covid-19 outbreaks last week but the number associated with school children or staff was in line with last week’s figures, when outbreaks among that cohort doubled.

The latest figures from the Health Protection Surveillance Centre (HPSC) show there were a total of 385 outbreaks notified in the week of April 3rd. That represented a reduction of 65 compared with the week before.

There were 44 new outbreaks associated with school children or school staff. This figure was down slightly from 49 last week, but double the week before when it was 22.

The HPSC noted that these outbreaks are associated with school children and/or school staff. Transmission of Covid-19 within the school has not necessarily been established in these outbreaks.

There were 14 new outbreaks reported in residential institutions, which was a doubling of the figure the week before.

In terms of childcare facilities, there were 17 new outbreaks, which was down slightly from 19 the week before.

There were 23 workplace outbreaks notified. These included 10 in a commercial setting, while there were two in meat plants.

The vast majority of outbreaks occurred in private houses, where there were 225 outbreaks notified.

There were 25 new outbreaks reported in vulnerable populations during the week. Twelve of these were in the homeless population, which was up from just a single outbreak the week before.

However, nine of these outbreaks were late notifications, with eight occurring in January and one in February.

There were seven outbreaks among Travellers, down from 21, while there were six outbreaks in the Roma community as compared with a single outbreak in that population the week before.