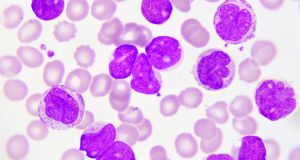 A file image of leukemia cells. An over-sterile germ-free environment in the first year of life is one of the major causal factors behind childhood leukaemia, a new study suggests. Image: iStock.

An over-sterile germ-free environment in the first year of life is one of the major causal factors behind childhood leukaemia, a new study suggests.

Coupled with unlucky genetics, it can leave a child vulnerable to common infections such as flu triggering the disease, says a leading expert.

Prof Mel Greaves, from the Institute of Cancer Research in London, claims the most common form of childhood leukaemia — acute lymphoblastic leukaemia (ALL) — could be prevented by “priming” infants’ immune systems by exposing them to harmless bugs.

If the theory is backed by more evidence, a preventative treatment — possibly involving probiotic bacterial supplements — could be trialled in the next five years. The research, published in the journal Nature Reviews Cancer, is based on a compilation of more than 30 years of work around the world investigating the origins of the disease.

Speaking at a press briefing in London, Prof Greaves said: “All the evidence is comprehensive. This is the bottom line for me — ALL is a paradox of progress in society.

“The research strongly suggests that ALL has a clear biological cause, and is triggered by a variety of infections in predisposed children whose immune systems have not been properly primed.

“It also busts some persistent myths about the causes of leukaemia, such as the damaging but unsubstantiated claims that the disease is commonly caused by exposure to elecromagnetic waves or pollution.”

The theory could explain why ALL, which affects white blood cells, is more prevalent in affluent societies where infants are shielded from infection.

It may also be the reason why babies that are not breastfed, do not mix with other children in nurseries, are born by Caesarian section, or do not have siblings are more likely to develop the disease.

ALL is rare, affecting about one in 2,000 UK children per year, but can have a devastating impact on families despite a high cure rate.

Its likely causes have been debated for 100 years with a host of possible trigger factors proposed, including radiation, mobile phones, wi-fi, power-lines, and exposure to pollutant chemicals.

Prof Greaves’ own research points towards a two-step process of genetic changes leading to the disease in children with abnormally formed immune systems.

The first, which may affect up to 5 per cent of children, produces a population of pre-malignant cells but in the vast majority of cases never results in cancer.

Children who have the first mutation are left vulnerable to a second genetic “hit” if their immune system has not developed properly, it is claimed. The trigger for the second mutation might be a common infection, such as seasonal flu, which sets off an uncontrolled inflammatory response.

In laboratory tests, susceptible mice reared in an ultra-clean germ-free environment developed ALL when they were later exposed to common infectious bugs.

Prof Greaves explained the immune system consisted of a network that was not hard-wired at birth. At an early stage in life, it needed infection to model and set itself up in the right way.

He said parents should “in no way” be blamed for children developing leukaemia, but advised them to be “less fussy about common or trivial infections”.

He also urged them to encourage contact between their babies and “as many other children as possible” in the first year of life.

Prof Charles Swanton, chief clinician at Cancer Research UK, said: “Childhood leukaemia is rare and it’s currently not known what or if there is anything that can be done to prevent it by either medical professionals or parents.

“We want to assure any parents of a child who has or has had leukaemia, that there’s nothing that we know of that could have been done to prevent their illness,” he said. - PA