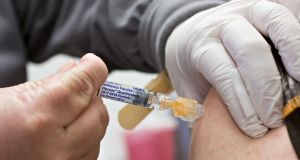 The Irish Pharmacy Union has confirmed 78,935 people were vaccinated across 762 pharmacies in the 2016/2017 flu season. Photograph: Daniel Acker/Bloomberg

The Health Service Executive is bracing itself for a winter flu crisis, following signals that existing vaccines may be unable to cope with new strains emerging in Australia and China.

The HSE is scaling up an intensive vaccination campaign targeted at staff in hospitals and vulnerable groups. Already, it has 100,000 more vaccines in circulation.

However, if strains of the flu virus that are already circulating in Australia or or their close relatives emerge in the northern hemisphere, the existing vaccine is likely to be only partially effective.

On Thursday, the chairman of the National Health Service in England, Prof Sir Malcolm Grant, admitted to health chiefs they are “more scared than we have ever been” about how bad the months ahead could be.

Australia and New Zealand are coming out of a winter where flu cases and hospitalisations doubled, and were more severe in many instances, as people were hit by two separate types of influenza: A (H3N2) and influenza B.

More than 650 people in the Australian state of Victoria were admitted with flu, while one in 10 of them were in such a severe condition that they required intensive care.

By the end of September more than 137,500 cases of flu had been reported across Australia, including a record-breaking 30,000 cases in August, more than double the 53,159 cases by the same time last year.

An ineffective vaccine seems to be the main reason for the severity of the epidemic as the H3N2 component of this year’s southern hemisphere flu vaccine was relatively ineffective. The vaccine being administered in Ireland contains the same strain of H3N2. It contains three influenza strains and was chosen by the World Health Organisation in February.

“It is not possible at this stage to say what the dominant flu strain in Ireland will be this winter and what coverage the flu vaccine will provide,” said Brenda Corcoran, head of the HSE’s National Immunisation Office.

The HSE has advised the public it is still worth getting a flu jab, as it may reduce the severity of the illness for some and reduces its spread. Even though it is not 100 per cent effective , it prevents hospitalisations and deaths among at-risk categories, Dr Corcoran said.

The chief concern is that a similar or slightly altered strain of H3N2 is on its way via air travel to Europe. H3N2 is a particularly nasty infection for children under 5 and adults over 65, though some virologists believe if may have originated in Europe and may not return.

Vaccination rates among HSE staff had increased by 50 per cent in the past year, but, on average, less than one-third of all its 100,000-plus staff get the jab each winter. Some hospitals, however, have achieved a 60 per cent vaccination rate.

The unpredictability of flu strains is reflected in the latest behaviour of a new strain of H7N9 bird flu circulating in China. Research last week suggested the virus can transmit easily among animals and cause lethal disease, raising alarm that the virus has the potential to trigger a global human pandemic. H7N9 has been circulating in China since 2013, causing severe disease in people exposed to infected poultry. The latest mutated versions of it are so different they no longer succumb to existing vaccines.

“The work is very concerning in terms of the implications for what H7N9 might do in the days ahead in terms of human infection,” said Dr Michael Osterholm, an infectious disease expert at the University of Minnesota.

Since 2013, the H7N9 bird flu virus has infected 1,562 people in China and killed at least 612. Some 40 per cent of people hospitalised with the virus died. “The whole world is worried about it,” Dr Osterholm added.

US Centres for Disease Control and Prevention ranks H7N9 as the leading animal flu strain with potential to cause a human pandemic. The most recent global pandemic was the 2009 H1N1 swine flu outbreak that infected millions and killed more than 200,000.

Genetic mutations and mixing between different influenza viruses create new viral strains every year, occasionally leading to pandemics. While common perception is that a new pandemic risk is highest in winter when viruses are most abundant and most likely to spread, a University of Texas study last week suggested northern hemisphere flu pandemics were most likely to emerge in late spring or early summer at the tail end of the normal flu season.

The Irish Pharmacy Union has confirmed 78,935 people were vaccinated across 762 pharmacies in the 2016/2017 flu season; an increase of 26 per cent on the previous season – it lasts from October to April.

Flu is responsible for between 200 and 500 deaths each year in Ireland, mostly among older people; last year there were three times more deaths than usual.