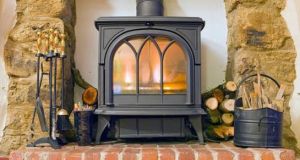 The humble household stove could be responsible for serious levels of air pollution in Ireland, depending on what fuels are going into it. File photograph: Getty Images

There should be no cause for complacency in Europe or Ireland over the findings of the Lancet medical journal’s major study of the global health impacts of pollution, which shows air pollution as the single biggest cause of deaths.

That is the verdict of Prof Colin O’Dowd, director of NUIG’s Centre for Climate and Air Pollution Studies. Europe is supposed to be one of the cleanest inhabited regions of the world but over the past decade air pollution has been increasing rather than decreasing, he told The Irish Times – and with it has come an increasing health toll.

International research to which his centre is contributing “reveals that even in developed western-world cities [including Dublin] with well-developed air pollution policies, there are regular occurrences of extreme air pollution events not too dissimilar to those encountered in developing megacities (eg Beijing)”.

These “extreme air pollution events are driven by burning of solid residential fuel (namely, peat, wood and biomass) and even though less than 4 per cent solid fuel is consumed, this accounts disproportionately for 70 per cent of the pollution”.

Diesel accounted for far less pollutants in the form of particulate matter than might be expected – at between 5 and 10 per cent.

He added: “The major concern is that these fuels are promoted as being ‘green’ or ‘low-carbon’ in terms of greenhouse gas emissions, but are devastating in terms of air pollution... and their consumption is predicted to increase significantly, thus turning back the clock in terms of clean air policy in the developed world.”

Prof O’Dowd confirmed “extraordinary levels of air pollution” exceeding WHO guidelines were found in Dublin during one in five winter days last year. These occurred at night due to domestic heating activity, while daytime air pollution levels (mainly from traffic), reached less than 10 per cent of night time peaks. 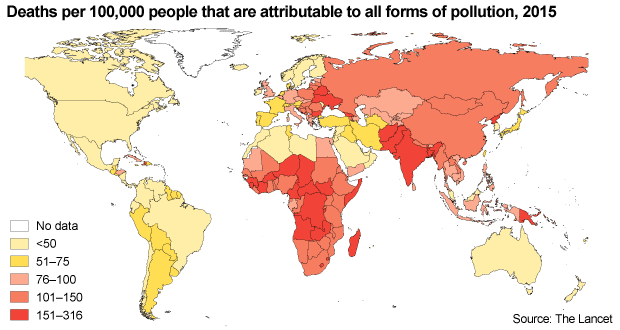 The Lancet report was important in showing the seriousness of the growing global air pollution problem, but he warned: “We are misleading ourselves that we are doing alright.”

The chief reason for this was increased use of so-called low-carbon fuels supposed to be of benefit to the environment – a practice encouraged to solve global warming, but at the same time causing “an air pollution health problem”.

Air pollution causes many of the major health concerns of our time, including asthma, cardiovascular diseases including stroke and heart disease, and cancer. It is estimated to cause approximately four deaths per day in the Republic.

In addition, impacts on health due to air pollution can result in absence from work and reduced productivity, increased expenditure on medicines and increased hospital admissions. The European Commission estimates air pollution costs Ireland €2 billion per year, including the loss of 382,000 workdays.

Data recorded by NUIG’s Mace Head Atmospheric Research Centre in Co Galway indicates the air pollution problem is not confined to urban areas in Ireland. Similar studies in the Midlands confirmed residential heating, mainly the burning of peat, was the predominant cause of growing air pollution there, Prof O’Dowd added.

In response to “worrying” air quality issues in Europe, the EPA is in the process of doubling the number of ambient air monitoring stations in Ireland to 70.

NUIG is also helping to develop a “next-generation air pollution network” where, for the first time, sophisticated mass spectrometers are deployed to provide near-real time identification of “air pollution culprits”.

This approach identifies the problem and provides the solution through “source fingerprinting”, Prof O’Dowd explained. As a consequence, reduction of specifically targeted residential fuel, amounting to a mere 4 per cent of the total consumption, will reduce the air pollution by a massive 70 per cent, he said.

Minister for Climate Action and Environment Denis Naughten this year launched a public consultation on Ireland’s first National Clean Air Strategy, “which will provide the framework for whole-of-government policies and drive actions to reduce harmful emissions from a range of sources, and clean our air”.

While there were successes in the past – the “smoky coal ban” in 26 urban areas has proved effective in reducing particulate matter and sulphur dioxide levels, there is a need to go further, Mr Naughten noted.

He accepted heating remains a key source of air pollution, in particular from solid fuel and smoky coal outside ban areas. He has committed to extending a ban nationwide for the 2018 home heating season.