Maysen Forbes, a former soldier in the Israeli army, has struggled with depression and anxiety 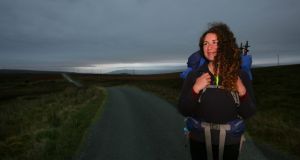 A 25-year old Canadian woman who is walking the 900km length of Ireland to focus attention on mental health says she has been inundated with stories about people’s struggles.

Maysen Forbes from Edmonton, who says she “came out of the mental health closet” a few years ago, has no Irish connections, but is walking The Ireland Way through 14 counties and seven mountain ranges to raise money for Mental Health Ireland.

Having set off from Castletownbere in Co Cork four and half weeks ago, she has had to pitch her tent only “six or seven times”, having encountered strangers along the way who put her up for the night.

“I know it sounds cheesy but people have always told me about the Irish hospitality and it’s all true. I have been given accommodation, even packed lunches when I leave in the morning, but it is the conversations I treasure. People have entrusted me with their own personal stories”.

She chose Ireland as it was “outside my comfort zone” and because the route was challenging mentally and physically, “but it’s not like it is Everest”.

She hopes to raise €3,000 for Mental Health Ireland by the time she reaches Ballycastle, Co Antrim on November 2nd.

A former soldier in the Israeli army, she has struggled against anxiety and depression since her early teens and made a suicide attempt, which she described as “a cry for attention rather than a serious attempt to end my life”, following a sexual assault.

“I am aware of the suicide rates in Ireland and as I walk through villages and the countryside I have noticed that there are a lot of older single men who live alone. Some of them have talked to me about growing up in a generation where they were told to ‘man up’ if they were vulnerable.”

The link for donations is: https://give.everydayhero.com/ie/hiking-the-ireland-way-for-mental-health-ireland