Key advantage is a high level of precision for very delicate surgery, conference is told 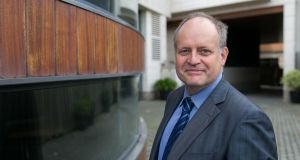 Prof Marc de Smet: “We anticipate that procedures currently off-limits will now be feasible, such as facilitating the delivery of gene therapy to the retina.” Photograph: Shane O’Neill, SON Photographic

The use of robots in surgery is going to transform medicine in the near future and revolutionise eye operations where a high degree of precision is required.

That is the prediction of Prof Marc de Smet who for close to 10 years has been developing the Preceyes microrobot at a research facility in Eindhoven, the Netherlands.

“Eye surgery demands a high level of skill and we have pretty much reached a limit as to what we can currently do unassisted. However, last year, we had a major breakthrough when we used robot-assisted surgery for the first time on the human eye,” he said.

The key advantage is the high levels of precision for very delicate surgery and, where even the most highly-skilled surgeon can have “microtremors” in his or her hands.

“The results, we have found, have been significantly fewer haemorrhages, and less trauma and damage to the retina. We anticipate that procedures currently off-limits will now be feasible, such as facilitating the delivery of gene therapy to the retina.”

When he first started out developing the technology, people were sceptical, he said, with a fear robots “would take over a person”. But now there was acceptance that microrobots could enhance human ability. His team aims to have regulatory approval by the end of 2018, with equipment potentially available to ophthalmic hospitals from 2019. The technology has undergone successful trials in Oxford University and the University of Rotterdam.

“In my view of the future, surgery will be a little like being a pilot on a commercial airline today,” Prof de Smet said. Pilots give instructions to a computer, and tell it what it should do at various stages of the flight, he pointed out. The surgeon of the future would perform in a similar way; tell the robot what should be done, remain in command, and give over the minutiae of surgery to the robotic system using instruments that are 10-times more precise.

The robot also provides positional memory, knowing where exactly to inject in a damaged retina, for example. It also remove some of the stress of performing surgery.

Up to 75 million people worldwide suffer from visual impairment related to retinal diseases that have no adequate treatment; it’s the leading cause of vision loss in developed countries. High-precision delivery of innovative drugs, gene therapy and cell products are widely anticipated to deliver new treatments. Robotic surgery will be a critical part of that mix, he said.

Dr Brian Vohnsen outlined advances in adaptive optics imaging – technology originally used in telescopes to see deep into space – to see into the retina. Previous options were limited due to the small size of the pupil.

Dr Vohnsen, who is head of UCD’s advanced adaptive optics imaging unit, uses himself as the subject of experiments. He and his team deploy low-power lasers to build up images of the living retina, using their own eyes as subjects. The aim is to develop techniques to detect early signs of disease and also to monitor progression of poorly-understood conditions. “You can see things with your own eyes, rather than asking someone else what they see.”

Fighting Blindness, the Irish patient-led charity that hosted the conference, urged the Government to prioritise funding of clinical genetic services for people with inherited retinal conditions. Such funding is fundamental to diagnosis, care and treatment of the estimated 5,000 people living with genetic sight loss in Ireland, chief executive Kevin Whelan said.

Current waiting lists for clinical genetic services in Ireland stretch up to 18 months and longer, meaning families affected by genetic sight loss are unable to access timely diagnosis, treatment and counselling, he added.

Lack of investment in ophthalmology services was exemplified in latest figures from the National Treatment Purchase Fund, Mr Whelan said, which show ophthalmology had the second-highest inpatient/day case waiting list at 12,025 people at the end of September, with one in five patients waiting more than a year. sOutpatient waiting list numbers climbed by 21 per cent to 38,094 in the 12-month period up to September, with 32 per cent waiting more than a year.

As part of the conference, a public engagement day takes place on Saturday for people affected by sight loss to ask questions of leading eye experts about the cutting-edge research, clinical trials and treatments. Attendees must register in advance: call 01 678 9004, email research@fightingblindness.ie or visit www.retina.ie