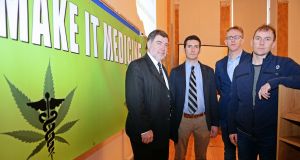 People Before Profit has called for unrestricted access to medicinal cannabis for patients who need it.

Speaking at a symposium arguing the case for medicinal cannabis in Dublin on Saturday, a spokesman for the party said it was seeking the normal passage of Gino Kenny TD’s private member’s Bill through the Oireachtas.

Minister for Health Simon Harris announced the formation of a compassionate access programme for cannabis-based products on Friday.

He plans to implement a Health Products Regulatory Authority (HPRA) report that recommends they be made available to some patients with multiple sclerosis and epilepsy, and those suffering nausea during chemotherapy.

Dr Michael Harty, who chairs the Oireachtas joint committee on health, welcomed the announcement and said Mr Kenny’s Bill was no longer needed, but the party believes the Bill will give “unrestricted access” for patients who need it.

Mr Kenny’s Bill will be debated at committee stage in coming weeks.

Speaking on the sidelines of the symposium, Melanie Murphy from Co Cork, described how medicinal cannabis had changed her life. “I was diagnosed with breast cancer in 2014,” she said.

“I had chemotherapy and radiotherapy but I ended up in terrible pain with my spine. That was because they irradiated the whole bone rather than just the tumour in my spine and hip.

“I ended up in excruciating pain. When I finished radiotherapy and tried the usual medications, nothing helped because the bone was so inflamed. I had no choice but to explore medicinal cannabis.

“I had my life in my hands. I have four young kids so I researched medicinal cannabis. The day after I took it for the first time, I couldn’t believe the difference. The pain had completely dissipated.

“It has never, to this day, returned to that severity. I don’t use any painkillers now at all. That has been a godsend for me. That’s where I am now. I’m still undergoing treatment and treatment will be ongoing indefinitely, but the cannabis oil has been instrumental in alleviating pain when nothing else worked.”

Colette Frawley Bailey (61) from Balbriggan has an inoperable aneurysm in her brain. “It causes terrible, terrible headaches,” she said.

“I’ve been on drugs almost every day of my life. They have no effect, but I was taking them because there was nothing else to take.

“They were prescribed for me but they never worked as such. Then, a friend of mine suffering from cancer told me about medicinal cannabis. I had never heard of it.

“At that stage, I was on the floor in terms of morale. I would have tried anything, so I said I would give it a go.

“To give it a good try, I went off all painkillers the same day. For me to do that, having been on painkillers all my life, was a big thing. But after a week, I noticed a difference. Over the following month, the difference was better again.

“There was only one occasion on which I had really bad pain, and I had to get morphine for it. Since then, it’s made an enormous difference for me. I’m just sorry I didn’t come across it sooner.”