Ireland has highest rate of Covid-19 in world, with 4,929 new cases reported yesterday

Professor Philip Nolan has said that it looks as if we are beginning to turn a corner as the five-day case average of Covid-19 has started to stabilise and the restrictions introduced on 26 December are beginning to have an effect. Video: RTE News 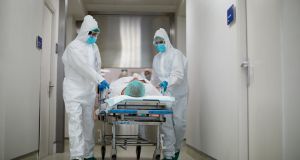 With officials warning that up to 2,500 virus patients could potentially need a hospital bed within the next two weeks, and 400 may require intensive care (ICU) treatment, surge plans are expected to be activated in the coming days. File photograph: iStock 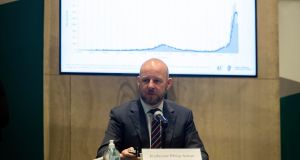 Prof Philip Nolan warns that figures will be at the worse end of the spectrum if people do not stick to the lockdown measures. Photograph: Colin Keegan, Collins Dublin

Thousands of health service staff are set to be redeployed and a deal allowing the use of private hospital capacity is to be triggered this week in order to cope with the unprecedented rise in Covid-19 cases.

With officials warning that up to 2,500 virus patients could potentially need a hospital bed within the next two weeks, and 400 may require intensive care (ICU) treatment, surge plans are expected to be activated in the coming days.

Despite signs that case numbers have stabilised, the health service is expected to come under intense pressure for the next week or two as hospitalisations and ICU admissions rise further before the situation starts to improve.

The number of Covid-19 patients in ICU, currently at 146, is expected to surpass last spring’s peak as soon as today. Half of these patients are on ventilators.

Figures will be at the worse end of the spectrum if people do not stick to the lockdown measures, Prof Philip Nolan of the National Public Health Emergency Team (Nphet) warned. 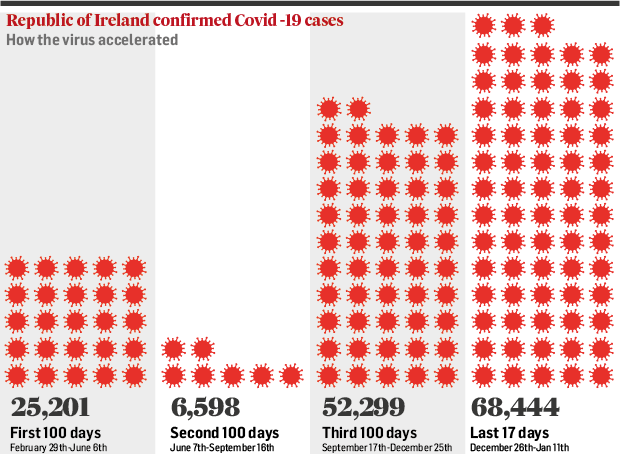 ICU capacity is about 300 but this can be stretched through surge measures while some patients can be given high-flow oxygen on ordinary wards.

There was better news on Monday about vaccines. Supplies of the Moderna jab, which was authorised last week, will arrive in Ireland at the end of the week. Separately, large quantities of the Oxford AstraZeneca vaccine should be available here immediately after authorisation if, as expected, is given by the European Medicines Agency at the end of the month, officials said.

Another eight deaths and 4,929 Covid-19 cases were reported on Monday, pushing the total number of cases over the 150,000 mark just eight days after the 100,000 case mark was exceeded. Ireland has the highest rate of Covid-19 in the world, according to figures published on Monday.

Minister for Health Stephen Donnelly said surge plans were in place which would be needed in the upcoming period. He said hospitalisations would “continue to increase” and this would happen relatively quickly.

Nphet officials declined to project how many deaths might occur, saying they wanted to support the HSE and focus on what was “avoidable”.

The highly transmissible variant first identified in the UK now accounts for almost half of all samples tested in the State, a Nphet briefing was told, and is expected to quickly become the dominant strain here.

Asked whether restrictions might have to remain in force for the entire year as a result, chief medical officer Dr Tony Holohan said this was “an unknown thing” for now.

The HSE has identified 1,300 nurses across the system who have ICU experience and could be deployed to the treatment of the sickest patients.

Mr Donnelly said the State was planning to have vaccinated 700,000 by the end of the first quarter of the year, which would cover almost all over-70s, frontline healthcare workers, and nursing home residents and staff. But this target relies on the delivery of 600,000 doses of the as-yet-unapproved Oxford AstraZeneca vaccine. The Cabinet is set to be updated on these figures on Tuesday.