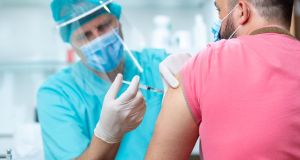 The anti-vax movement has been gearing up for some time. Photograph: iStock

Disinformation is on the rampage with manipulated stories spreading like wildfire on social media. While disinformation has always been with us, the power at which it spreads on social media platforms is new. Since the 2016 US election, the term’s appearance in news headlines has grown tenfold.

Four years ago, the focus was on Russian interference in elections. During the Covid-19 pandemic, it became clear that non-state actors are a significant threat. Even before the pandemic, some 62% of Irish people were concerned about what was real and what was fake in their social media feeds, according to the 2020 Reuters Digital News Report. Given the volumes of Covid-19 disinformation over the past nine months, that percentage is likely to be far higher when the 2021 Report is published later this year.

Tackling vaccine-related disinformation is an imperative as the rollout gets underway. As part of their fact-checking series, TheJournal.ie has documented multiple instances of anti-vax content circulating on social media in Ireland, including claims that the vaccines will lead to “genetic manipulation” or “female sterilisation”.

The anti-vax movement was well-established prior to the pandemic and seized on the crisis as an opportunity to grow support for their cause. Those who oppose vaccines have various motives, with some being more persuadable towards science than others. Internationally, some are influenced by “alternative medicine”, which is suspicious of modern medicine, while others are motivated by genuine concern for their children and grandchildren. In Ireland, for example, some research has found that parents within the anti-HPV vaccine movement were incentivised to act based on a perceived lack of satisfactory responses from their own doctors.

Many assume the antidote to disinformation is relatively straightforward: increase media literacy. Indeed, research has found that simply prompting people to think about the accuracy of whatever they see in their news feeds will greatly improve their ability to reject disinformation while also reducing the intention to share disinformation.

As a result, there are regular calls for the promotion of various types of literacy including information and scientific literacy but most especially media literacy. Many countries have provided additional funding for media literacy programmes or launched campaigns such as bemediasmart.ie in Ireland. Media literacy activities are often supported by the social media platforms along with pretty minimal efforts to promote accurate information such as links to the World Health Organisation on disputed Covid content. As Dr Eileen Culloty and I argue in a forthcoming book on disinformation and manipulation in digital media, while these efforts are worthwhile, and intentions are benign, unfortunately it is not quite that simple to resolve.

There is only limited evidence that literacy programmes are effective for all cases. Most are targeted at young adults and children and delivered through educational programmes. Yet, we know that older adults often share more disinformation than younger groups. Therefore, there is an imperative to also address the lifelong literacy needs of older age-groups as without this there is a real risk of allowing a generation gap to widen.

There are also clear limits to what literacy education in any guise can achieve. It puts most of the emphasis on the individual and on individual action.

Yet, we know that if disinformation is received from peers or if our reactions are emotionally charged then simple individual correction is unlikely to work. This kind of peer sharing is particularly insidious and problematic because we know that the best way to spread disinformation is through emotional appeals on personal networks. Personal storytelling is particularly difficult to counteract as it is not really amenable to fact-checking and contradicting personal stories is socially taboo. Anti-vax groups exploit this by highlighting personal testimony from parents who claim their children were badly affected by a vaccine.

Other research has found that media literacy can endow people with a false sense of confidence in their ability to spot disinformation. Researchers also worry that media literacy may foster cynicism towards all information by encouraging people to adopt a critical stance. This is especially problematic as bad actors deploy the same rhetoric of “critical thinking” and “asking questions” to undermine science and evidence-based information.

Thus, these audience-focussed measures should be seen as just one part of a wider effort to tackle disinformation, a vital quest as we look towards mass vaccination this year. In a research project we are working on, Provenance, we are looking at adding friction or encouraging people to stop and think before they like or share a post. Twitter are also experimenting with this kind of approach which may go some way to breaking the cycle of instantaneous reaction on social media. These efforts can be augmented by media literacy or factchecking prompts.

Some researchers are working on games, with the insight that showing people how to produce disinformation can provide a type of inoculation against it. In other research, we are investigating how to cultivate the power of citizen voices and peer storytelling to reinforce accurate information. Citizen voices are already used to great effect in other areas such as citizens’ assemblies and the initial results from our research onCovid-19 disinformation and are encouraging.

The message then for Government, Nphet and others in charge of rolling out the vaccine programme is that tackling disinformation about the vaccine and the virus must be a multi-pronged effort. Investment in media literacy is vital but so too is hearing from peers, hearing personal stories and understanding that vaccine efficacy is part of the general scientific consensus, not simply the opinion of individual scientists. The latest behavioural, crisis relevant research can be found online (scibeh.org), a really useful resource for citizens, policymakers and journalists.

Dr Jane Suiter is the Irish Research Council's Researcher of the Year 2020 for her work on the information environment in elections and referendums and on deliberation in the public sphere. She is an associate professor in DCU and director of the research institute FuJo.