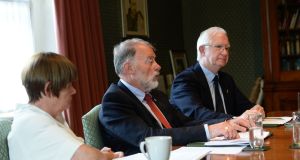 The HSE was “specifically aware” at the time the order paid supplemental pay to employees.

After the 2013 direction from the HSE banning top-up payments, it became necessary for the charity to regularise matters and ensure no non-exchequer funding was used to supplement approved rates of pay. However, this could have “serious implications” for the order’s funding due to contractual terms and future pension risk of the employees, it said.

The Vatican had also made it a condition of the restructuring of St John of God that any liabilities be identified and “dealt with”.

SJOG told auditors it was misleading and defamatory to claim in the report it was not compliance with pay policy pre-2013. It “categorically rejected” the internal audit’s assertion that the charity’s action lacked candour and asked for this to be deleted.

HSE internal audit rejected these arguments and declined to make the changes requested, though it acknowledged the charity co-operated fully with the process.

SJOG also said it was extremely disappointed to discover 139 cases of non-compliance since last December and was doing what it could to rectify the position for the staff and service users involved.