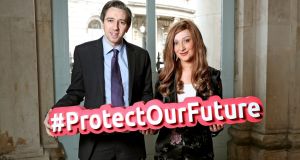 Minister for Health Simon Harris with Laura Brennan from Co Clare, who has terminal cervical cancer, at the launch of the latest phase of the HSE’s HPV Vaccine Information Campaign. Photograph: Marc O’Sullivan

Minister for Health Simon Harris has urged parents to get their medical information from medical sources rather than social media.

Speaking as he announced the second phase of a national cervical cancer vaccination programme – aimed at first-year secondary school girls – he said the medical evidence showed it saved lives.

Uptake rate for the (Human papillomavirus) HPV vaccine has fallen dramatically in recent years to about 50 per cent. The decline occurred amid widespread fears, discussed particularly on anti-vaccination social media sites, that the vaccine has damaging side effects, including chronic fatigue.

Following a concerted campaign by the HSE to counter this, uptake has increased to 60 per cent.

“I’m very concerned there was significant misinformation out there in relation to this vaccine,” said Mr Harris. “I am very pleased that not just the HSE but also a number of medical advocates have come together to promote the vaccine, to promote the facts.

“There’s only one website in Ireland that provides factual information that’s been endorsed by the World Health Organisation. That’s HPV.ie and I would encourage anyone looking for information on this life-saving vaccine to go there.

“It’s really important parents have the opportunity to establish the medical facts to make an informed decision in relation to their children. What we do know and what all the evidence shows is that this vaccine saves lives. I welcome the increase and the fact that two out of three girls are now getting this vaccine but we can’t be complacent. We’ve so much more to do.”

The HPV vaccine is administered in two doses. According to the Health Service Executive more than 220,000 Irish girls have safely received the vaccine and more than 200 million doses have been given worldwide.

“No serious side effects in any country can be scientifically attributed to this vaccine,” according to the HSE.

The Minister would “instinctively” like to see the vaccine extended to boys, who are carriers of the virus.

“There’s a process that we go through before we extend vaccinations. That’s the Hiqa [Health Information and Quality Authority] health technology assessment. I’ve asked Hiqa to do this assessment. That work is under way and is due to conclude later this year. If there is a positive outcome from that I’d certainly like to see it extended for boys.”

Any girl who has missed out on the vaccine can still get it and should contact their GP or local primary care centre.