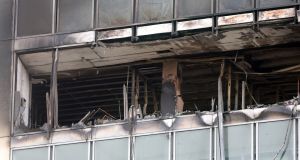 The scene of the Metro Hotel in Ballymun, Dublin, after firefighters extinguished the blaze. Photograph: Colin Keegan/Collins Dublin

The Ballymun hotel fire has starkly illustrated the need for improved training, resources and enhanced risk assessment in relation to the threat of fires in high-rise buildings, according to union representatives of Dublin firefighters.

Representatives of SIPTU and Fórsa, who work for Dublin Fire Brigade (DFB), have sought an urgent meeting with the Minister for Housing, Planning and Local Government, Eoghan Murphy, because concerns they had raised following the Grenfell Tower fire in London had not been addressed.

SIPTU sector organiser Brendan O’Brien said: “DFB firefighters believe the high-rise fire in Ballymun on Wednesday has starkly illustrated why their repeated demands for high-rise firefighting training as well as the provision of adequate resources and risk assessments must be acted on.

“Since 1981, there has been no increase in the provision of high-reach fire appliances, despite the city having grown considerably since then,” he added.

SIPTU DFB convenor Shane McGill said: “In the aftermath of the Grenfell Tower fire in London last June, we participated in a task group established by the Minister to examine fire safety in high-rise buildings. Sadly, to date the concerns we have raised at this group in relation to training, resources and risk assessments have been ignored.”

Dublin’s Chief Fire Officer Patrick Fleming said on RTÉ’s Morning Ireland that he wanted to reassure the public the Ballymun fire was not a Grenfell Tower type fire and that there had been an orderly evacuation of the building which was a credit to the emergency services. But, he noted, it did highlight the fact that people need to know what to do when a fire alarm went off.

Fórsa head of communications Bernard Harbor said the Government’s fire safety policy, called “Keeping Communities Safe”, had again been shown to be flawed as it failed to address the need for comprehensive risk assessments, training, and resources specifically for high-rise fires.

“We are calling for an urgent meeting with the Minister to discuss what action must be taken to ensure the safety of both the public and firefighters,” he added.

DFB SIPTU section chair Deirdre Taylor said: “We knew it was only a matter of time before a large-scale high-rise fire incident occurred in Dublin. The Area Risk Categorisation document for the Ballymun area does not include high-rise buildings such as the Metro [Hotel]. Thankfully, there has been no loss of life in this case. We hope that lessons can be learned from this incident before it is too late.”

Mr Murphy has been asked for a response to the issues raised by the DFB unions.

No benefit to mask outdoors when socially distancing, says professor