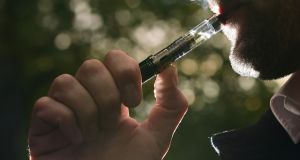 E-cigarettes has been given an emphatic thumbs up by health experts after the first long-term study of its effects in ex-smokers. Photograph: Yui Mok/PA Wire

While the study published on Tuesday in the medical journal Thorax suggesting e-cigarette vapour disables protective cells in the lung is a very small one, it will add to concern among some experts about the safety of vaping.

With just eight human subjects, the research cannot be considered definitive. For e-cigarettes to be classified as producing the same effects as long-term smoking would require longer and bigger clinical trials.

Vaping is increasing in popularity, but most of the current body of research has focused on the chemical composition of e-cigarette liquid before it is vaped. E-cigarettes contain variable amounts of nicotine but offer much reduced exposure to the cancer-causing chemicals found in conventional cigarette smoke.

Lead author of the study Prof David Thickett noted that e-cigarettes “are safer in terms of cancer risk, but if you vape for 20 or 30 years and this can cause COPD (a progressive lung condition associated with smoking), then that’s something we need to know about.”

One of the major health concerns about e-cigarettes is whether they act as a gateway to conventional smoking, especially among children.

A comprehensive review of more than 800 studies on e-cigarettes published earlier this year found that children who vape are likely to try more harmful tobacco products. However it concluded e-cigarettes do hold some promise for helping adults already smoking regular cigarettes to quit, but only if they switch exclusively to e-cigarettes.

The review, carried out by the US National Academies of Science, Engineering and Medicine (NAS) found that while most vaping products emit a variety of potentially toxic substances, their number and intensity is highly variable.

A study published in the New England Journal of Medicine in June attempted to answer the key question: do e-cigarettes work as well as either no treatment or smoking-cessation treatments, such as nicotine patches or gum, to get smokers to quit?

In the UK there are sharp divisions within the medical community as to the efficacy and safety of e-cigarettes. The Royal College of Physicians of England supports vaping as a smoking cessation tool. But leading public health expert Dr Martin McKee of the London School of Hygiene and Tropical Medicine told The Financial Times recently that “England is a complete outlier in its approach to electronic cigarettes”.