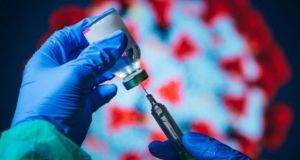 The State is “on the cusp” of deploying at least two Covid-19 vaccines as part of a national vaccination programme, but concerns remain around ensuring sufficient numbers of people take up the option of getting vaccinated, deputy chief medical officer Dr Ronan Glynn has said.

“Our research tells us that the majority have already decided that they will definitely (45 per cent) or probably (28 per cent) take the vaccine when it is offered to them while, at the other end of the spectrum, a small – but vocal – minority (5 per cent) absolutely will not take it,” he said on Sunday.

He moved to reassure people that there were no concerns in relation to safety of the vaccine in spite of the speed at which things were happening.

“Subject to authorisation by the European Medicines Agency, Ireland is on the cusp of deploying at least two Covid-19 vaccines as part of a national vaccination programme,” he said.

“Many are now asking, how has it all happened so quickly? After all, we know that, normally, it takes about 10 years to develop a new vaccine, to make sure it is safe and effective, and to make enough of it for everyone who needs it.

“There are several reasons why this timeline has been really cut down for Covid-19 vaccine candidates. First, there have been enormous levels of investment and scientific and medical research, on a scale never previously seen in vaccine development,” he said.

Secondly, because of the high number of new cases of Covid-19 across the world, the vaccine trials were able to quickly measure differences in disease risk between those who received the vaccine and those who got the placebo or dummy vaccine.

Many of the processes which normally take place one after the other in vaccine development have instead been running in parallel, he said. “For example, large-scale manufacturing of vaccines started even before the results of phase 3 trials were available.

“Similarly, regulators and those developing the vaccines started their conversations very early in the process so that the regulators were aware of developments and so that the process of authorisation can now be as swift as possible.

“None of these factors imply that safety, scientific or ethical integrity have been compromised, or that shortcuts have been taken,” he added.

However, Dr Glynn said there were still “many uncertainties and barriers to be overcome”, including the possibility that many people will not take the vaccine. “First and foremost, people must be willing to get vaccinated,” he said.

Many people will have questions, and will no doubt “be faced with rumour and misinformation, particularly online”.

“To counter this, transparency and trust must be the cornerstone of our approach to addressing uncertainties and building vaccine confidence.

“Healthcare professionals – our doctors, nurses, pharmacists and allied health professionals – all across the country will have a central role to play in this process, just as they have been the foundation upon which the entire response to Covid-19 to date has been premised.”

The State’s vaccine taskforce report on the roll out of the vaccine is expected to be published on Tuesday.

There has now been 76,185 confirmed cases of the virus and 2,124 deaths since the start of the pandemic.

Of the cases notified in the Republic on Sunday, 198 were among men and 230 among women and 66 per cent were under 45 years of age.

A total of 122 cases were reported in Dublin, 46 in Donegal, 30 in Limerick, 22 in Laois, 20 in Cork and the remaining 189 cases were spread across all other counties.

As of 2pm on Sunday, 193 Covid-19 patients were hospitalised, of which 31 were in ICU, with 13 more hospitalisations in the previous 24 hours.

Meanwhile, the North’s Department of Health reported 13 more Covid-19 deaths over Saturday and Sunday, taking the toll since the start of the pandemic in Northern Ireland to 1,124.

There were nine deaths recorded on Saturday and four on Sunday. There were 60 deaths reported in the past seven days, which is just two fewer than the 62 in the previous week.

There were 476 new coronavirus cases reported on Saturday and 483 on Sunday bringing the total of cases to 58,216.