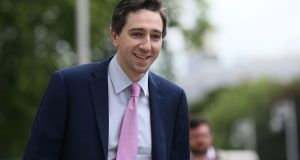 Minister for Health Simon Harris said talks between his officials and St Vincent’s on the terms of the State’s investment in the new hospital were ongoing, but good progress was being made. Photograph: Brian Lawless/PA Wire

Agreement on the terms on which the National Maternity Hospital (NMH) will move to St Vincent’s Hospital is expected to be reached within the next week.

Proposals to tackle the controversial issues of ownership of the hospital after it moves are likely to come before Cabinet shortly, according to Minister for Health Simon Harris.

Mr Harris said talks between his officials and St Vincent’s on the terms of the State’s investment in the new hospital were ongoing, but good progress was being made.

The talks have been positive and constructive, he told the Oireachtas health committee. The decision by the Sisters of Charity to withdraw from involvement in St Vincent’s had removed one of the significant concerns people had about the proposed move of the NMH, in relation to the possibility of religious interference, Mr Harris said. However, the other issue was ownership of the new hospital, and this was still being discussed by the Department of Health and St Vincent’s.

The discussions have centred on legal mechanisms that will guarantee the State’s investment in the new development and have involved the Chief State Solicitor’s office, it is understood.

Meanwhile, former NMH master Dr Peter Boylan has warned that the voluntary status of the NMH could be threatened as a result of its planned move from Holles Street to St Vincent’s Hospital.

Under current plans, the NMH will be run by a newly created company when it moves to the St Vincent’s campus. This will require a change in the charter under which the maternity hospital was established, which in turn will be effected through an Act of the Oireachtas.

Dr Boylan said this would open up the entire charter to political scrutiny, and some TDs were likely to call for the hospital to come under the direct control of the Health Service Executive.

The NMH charter dates back to 1903 and was last amended in 1936. Current arrangements, which provide for the appointment of up to 100 governors and the automatic appointment of the Catholic Archbishop of Dublin as chairman, are seen as outdated.

The current Archbishop, Dr Diarmuid Martin, does not attend meetings and has said he considers the arrangement as “anachronistic”. He has asked to be removed from the post.

However, Holles Street jealously guards its independence and the right to appoint an obstetrician member of staff as master to run the hospital. Any attempt to remove its voluntary status and place it under HSE control would be stoutly resisted.

The board of governors of the NMH met on Wednesday evening for the first time since the controversy over the move to St Vincent’s erupted. The meeting was originally scheduled to take place in May but was postponed because of the row.

The 90-strong body was briefed on the deal between the two hospitals brokered by mediator Kieran Mulvey last November, and on developments since.

No formal decisions were due to be made at the annual general meeting and it is likely the board of governors will have to meet again at a future date to approve any agreement to move to St Vincent’s.

Newly elected Dublin Lord Mayor, Sinn Féin’s Micheál MacDonncha, attended the agm as an ex officio member but did not exercise his right under the charter to chair the meeting in the absence of the chairman.