Reactions to Charlie Sheen’s HIV status not so positive 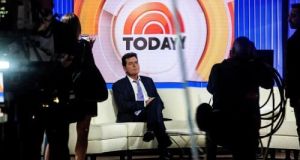 Charlie Sheen waits on the set of the Today Show before formally announcing that he is HIV positive in an interview. Photograph: Andrew Burton/Getty Images

Much has changed since the terrifying rise of HIV and Aids in the 1980s – most obviously, sophisticated treatments for the virus means it is a chronic rather than terminal illness.

Furthermore, modern antivirals render the virus nearly undetectable, and pre-exposure drugs are very effective at protecting people who might be exposed to infection. These factors and more have led to a gradual destigmatisation of HIV over the past three decades.

That progress was tested this week, however, when actor Charlie Sheen confirmed on a US talk show that he is HIV positive. Appearing on The Today Show with Matt Lauer on Tuesday morning, he acknowledged his disclosure was prompted by the fact that he has paid several million dollars in extortion money in an attempt to keep his status private in the four years since his diagnosis.

“I have to put a stop to this onslaught, this barrage of attacks and of sub-truths and very harmful and mercurial stories that are about me,” he told Lauer. “I release myself from this prison today.”

As a way of putting a price on the stigma still associated with the virus, it was very revealing. Presumably, all those millions were meant as a way of preserving his public reputation, and by extension his career – the grim irony being that his career was on a long downward spiral before he contracted HIV.

Sheen has clearly struggled with a number of personal issues for many years, from depression to drug abuse.

One of the most appalling aspects of the 1980s reaction to the rise of HIV was the commonly heard refrain that HIV was some sort of punishment for homosexuals and drug users, a price to pay for a “licentious” lifestyle.

But perhaps the most troubling aspect of the story is the conflicting accounts of whether Sheen adequately informed and protected the women he slept with. Sheen told Lauer he had disclosed his status to all his partners, while a former girlfriend, Bree Olson, subsequently claimed he never told her about his status during their year-long relationship.

In the US, 24 states have HIV criminalisation statutes, designed to ensure people disclose their status to partners, but which are in practice stigmatising measures that can make such disclosure more problematic.

Sheen is hardly a desirable advocate for HIV issues – his history of domestic abuse and public tirades make him a fairly unsympathetic character. But we should hope that his disclosure will act as a turning point, an opportunity for the discourse around HIV to change for the better.