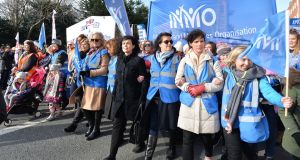 The public service pay agreement is “compromised” but still standing after the Government’s acceptance of proposals to resolve the recent nurses’ dispute, the trade union Siptu has said.

Siptu deputy general secretary John King said that if his union’s members in the public service were not treated equally in relation to their concerns, it would be left with no alternative but to advance their “legitimate claims through strike and industrial action”.

Mr King said that in the proposed deal to end a series of strikes by nurses, the Minister for Public Expenditure Paschal Donohoe had accepted “there is a degree of flexibility within the public service stability agreement”.

“This flexibility will be used to advance the interests of Siptu members in the public service,” he said.

Mr King said the extent to which the public service agreement - which is scheduled to run until the end of 2020 - had been compromised remained to be seen.

In an article in Siptu’s newspaper Liberty, he said: “The new situation presents an opportunity to ensure anomalies in the agreement’s implementation, such as the rolling out of job evaluation schemes, is effectively dealt with.

“The methodologies used to produce the nursing proposals and the acceptance by the Department of Finance and Public Expenditure that they are within the parameters of the agreement means that they must be available to all other groups and grades of workers in the public service equally.”

He said Siptu would consult with other trade unions affiliated to the Irish Congress of Trade Unions about how the current agreement could be improved “while maintaining its integrity”.

“Your union will then advance members’ claims with the Government”, he said.

The proposals put forward by the Labour Court last week have been accepted by the Government and will be voted on by members of the Irish Nurses and Midwives Organisation in the coming weeks.

The union’s executive has backed the proposals, which would see nurses secure pay improvements through the extension of allowances and the introduction of a new scale in return for improved productivity .

It is understood that public service unions have been meeting individually with senior officers of the public service committee of the Irish Congress of Trade Unions in recent days on their views in the light of the nurses’ proposals. The committee is then expected tobring these views of affiliate unions to the Government.

Separately, the Labour Court is expected to issue correspondence to psychiatric nurses over the next day or so as part of an attempt to resolve a dispute over recruitment and retention issues which led to recent disruption in the States’s mental health services.

The Psychiatric Nurses Association (PNA) is not covered by the Labour Court proposals that emerged last week to avert planned work stoppages by members of the INMO. The PNA suspended its own scheduled strike action last week to allow further talks to take place.

Peter Hughes, PNA general secretary, said on Wednesday that despite talks at the Workplace Relations Commission on Monday, there were a number of issues yet to be resolved.

The PNA has argued that pay needed to be improved to tackle recruitment and retention issues in mental health services.