Charity says more than €2.3m will be invested in 100 researchers across State this year 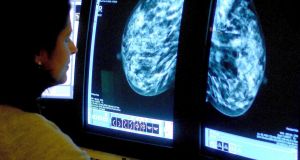 The Irish Cancer Society says it is on track to spend €30 million on cancer research in a decade, thanks to donations from the public.

This year, €2.3 million will be invested in more than 100 cancer researchers across the State, the charity says.

“This decade to 2020 has broken all records for cancer research in Ireland. Thanks to the generosity of the public, the society has invested more money in life-saving research than ever before, finding better ways to prevent, detect and treat cancer,” chief executive Averil Power said at the launch of the charity’s 2019 research plan.

Last October, it emerged the ICS was one of five charities to receive over €6 million each from the estate of Laois woman, Elizabeth O’Kelly.

Mrs O’Kelly, who died aged 92 in December 2016, had extensive property interests in Dublin and made about €30 million from the sale of the Leinster Leader newspaper in 2005.

The research funded by the society focuses on way to help people reduce their risk of getting cancer, finding better way to detect the disease, investigating improvements in diagnosis and treatment, and working on way of improving the quality of life for those living with cancer.

Ms Power urged the public to support the charity’s fundraiser on Daffodil Day, March 22nd. “Every year we have to turn away researchers who come to us with potentially life-saving projects, simply because we don’t have enough funds to support them. Unfortunately, this means we may have had to turn down a potential breakthrough or cure.”

At the launch, researchers highlighted the importance of ICS funding on their work.

Dr Emma Allott, a lecturer at Queen’s University Belfast has been researching the links between cholesterol levels and advanced prostate cancer in men since being awarded research funding in 2016.

“The more we know about why men get advanced prostate cancer, the more we can do to stop it happening in the first place. Preventing prostate cancer means saving countless men from the often harsh treatment that comes with this disease. The funding has allowed me to work with international experts and gain invaluable expertise.”

Dr Aideen Ryan, a lecturer in tumour immunology at NUI Galway, has worked since 2013 on finding new ways to treat bowel cancer through immunotherapy - treatments that boost the body’s natural defences to fight cancer.

“Bowel cancer is the second biggest cause of cancer deaths in Ireland, so I feel privileged that my funding has given me the chance to explore new ways to treat this disease and save lives. Through my fellowship I wanted to give more hope to people going through the most advanced forms of bowel cancer by exploring better treatments. ”

Both researchers were due to be honoured for their work at the ICS research awards in the House of Lords on Friday night.