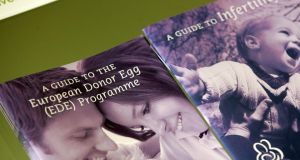 Clinics fear the Children and Family Relationships Bill, which proposes to create a national register of sperm and egg donors, will lead to a reduction in donations and encourage more couples with fertility issues to seek help abroad. Photograph: Alan Betson /The Irish Times

Opposition is growing among private fertility clinics to the Government’s plans to ban anonymous egg and sperm donation.

Clinics fear the Children and Family Relationships Bill, which proposes to create a national register of sperm and egg donors, will lead to a reduction in donations and encourage more couples with fertility issues to seek help abroad.

In the strongest attack yet, Dr John Waterstone, medical director of the Cork Fertility Centre, claimed the proposals on sperm and egg donations were “unacceptable and unworkable” and said the Oireachtas should reject the proposed legislation.

The Bill raised questions about the criminalisation of couples who acquire anonymously donated eggs or sperm, and the doctors who treat them, he said.

“The belief that a donor-conceived child has a right to identify and meet his or her donor, which supersedes the rights of the parents to privacy and autonomy, is arbitrary and unproven.”

Donors and recipients should be allowed opt for either anonymous or identifiable donation as they see fit, he said.

Dr Waterstone asked whether the State was going to criminalise doctors who respect the rights of couples to pursue anonymous egg donation abroad and provided assistance.

“Does the State require clinicians to become State spies and inform upon patients who have become pregnant after anonymous egg donation abroad and who wish to conceal that fact?

“Who are the legal parents of a donor-conceived child whose name does not appear on the registry because its parents have avoided identification?”

Declan Keane, clinical embryologist at ReproMed fertility clinic, welcomed the legislation but said it would impact on many people currently in treatment as well as those hoping to access fertility treatment in the future.

The proposed register of donors may lead to a reluctance by men and women to donate if they prefer to remain anonymous, he said. “This in turn may reduce supply, cause costs to rise and create a waiting list for treatment.”

“It may also lead to a situation where people rush through fertility treatment before legislation is enacted or lead to a scenario where people go abroad to access anonymous donations.”

State support should be provided for couples and individuals to access fertility treatment, he said.

In the UK, the NHS offers three free IVF cycles to couples and individuals under 40 and one to those over the age of 40 years.