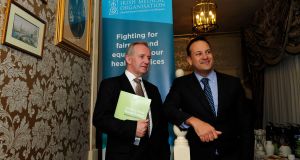 Nursing Homes Ireland (NHI) has said it has hundreds of beds available to help relieve pressure on hospitals continuing to struggle under the pressure of winter admissions.

On Thursday, the number of people on trolleys in hospitals across the country dipped to 578 from 602 on Wednesday and a record high of 612 on Tuesday, according to the Irish Nurses and Midwives Organisation (INMO).

However, despite the decline, there were continuing calls for further action to alleviate intensive pressure on hospitals and medical staff.

NHI said there were at least 742 available beds identified in a snap survey of its members that could offer alternative care to appropriate hospital patients.

It said the actual number may be “much higher”, as just 176 of more than 370 member nursing homes responded to the impromptu poll.

“There must be a concerted focus upon ensuring the hundreds who continue to remain within hospitals can access beds that are available for them within their local nursing homes in an immediate timeframe,” said NHI chief executive Tadhg Daly.

The rate of improvement on so-called “delayed discharges” has increased, falling to 436 by late December, compared with a record 832 in October 2014.

However, NHI said that while nursing homes had played a significant role, more can be done to offer alternative bed capacity.

Meanwhile, as further solutions to this week’s hospital overcrowding crisis are sought, the Irish Medical Organisation said general practitioners could tolerate no further strain as they were already approaching “breaking point”.

“The worsening position in general practice, which has been developing for some time, has reached breaking point and is exacerbated by the situation in our emergency departments,” said Padraig McGarry, chairman of the IMO’s GP committee.

“Patients who have had scheduled surgery and planned procedures cancelled are now inevitably turning to GPs,” Dr McGarry added.

The INMO said further options for relieving pressure could be found by approaching hospitals in Northern Ireland. It said there were 46 people waiting for beds in Letterkenny University Hospital on Thursday morning.

The Emergency Department National Escalation Policy was applied and Letterkenny management opened three “escalation areas” to accommodate patients. Others were in treatment rooms and ward corridors.

The hospital has seen a 10 per cent increase in emergency department attendances this month, it said.

“This volume of overcrowding in Letterkenny University Hospital is not sustainable and cannot be allowed to continue,” said Maura Hickey, the INMO industrial relations officer.

“These patients, waiting for beds in the hospital and community hospitals, are individual people who require admission. Their loss of dignity, privacy and access to care in an appropriate environment cannot be forgotten and should be the HSE’s priority.”