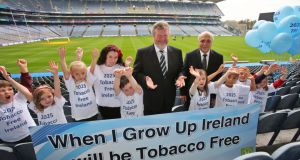 Minister for Health Dr James Reilly and Dr Haik Nikogosian (right), head of the Framework Convention of Tobacco Control at the World Health Organisation, at the launch today of the Tobacco Free Ireland policy document at Croke Park in Dublin. Photograph: Colin Keegan/Collins

A plan to reduce the prevalence of smoking in Ireland to less than 5 per cent of the population by 2025 has been published by Minister for Health James Reilly.

Tobacco Free Ireland recommends introducing legislation to prohibit smoking within the campuses of primary schools, secondary schools and child care facilities, as well as the promotion of tobacco free campuses for all third level institutions.

The report sets out 60 recommendations aimed at cutting the rate of smoking. Currently 22 per cent of the adult population smokes. Dr Reilly said the measures would seek to protect the next generation from taking up “this dreadful habit that kills one in two of those who use it”.

The document broadly sets out the Government’s aims but a detailed action plan with timelines has yet to be developed.

The proposals, which have been criticised by smokers’ rights campaigners, would also see an annual excise duty increase on tobacco products applied over a continuous five year period. “Robust evidence exists demonstrating that higher tobacco taxes and prices are the single most effective measure to reduce overall tobacco use,” the report states.

Also speaking at the event, World Health Organisation tobacco control chief Dr Haik Nikogosian said the plan was a “bold example” of Ireland’s “strong leadership” on tobacco measures over the past number of years. In particular Dr Nikogosian praised the aim of “denormalising” smoking, that is to make it socially unacceptable.

However Campaigners have criticised the proposal as “morally wrong”, saying it will stigmatise hundreds of thousands of adults around the country. “Denormalising tobacco will drive more and more people to the black market and the fringes of society,” said Forest Eireann spokesman John Mallon.

Ireland will not be tobacco free by 2015, Mr Mallon said, adding that Dr Reilly’s “personal crusade to denormalise tobacco and stigmatise adults who choose to smoke has got to stop What next? Alcohol? Sugary drinks? Convenience food?”.

The Irish Cancer society meanwhile welcomed the plan, especially its aim “to deal with the constant marketing assault on children and teens”. But the organisation also questioned whether the Department of Health had the budget to follow through on the proposals.

It’s chief executive John McCormack called on Dr Reilly to seek an increased health budget to prevent this “ambitious strategy” becoming “diluted”. He added that the society looked forward to seeing how the Government will deal with poorer areas where women “are over twice as likely to smoke as better-off women… because of the social conditions that affect their lives”.

Dr Reilly said he hoped to have the heads of Bill for anti-tobacco legislation prepared later this month.

He warned that plans to introduce uniform cigarette packaging and other anti-smoking measures would draw intense lobbying from big tobacco companies. “The full weight of the tobacco industry will now be turned on us,” he said. “They employed 161 lobbyists to lobby MEPs… that’s the level of resource they have and they’re prepared to throw at this.

Over the past year, industry lobbyists have secured meetings with a number of Government Ministers and officials, including Taoiseach Enda Kenny. Asked about the possibility of further such meetings Dr Reilly said it was “very unlikely”.

The Department of Health estimates at least 5,200 people die each year from diseases caused by tobacco use. This represents almost one in five of all deaths.