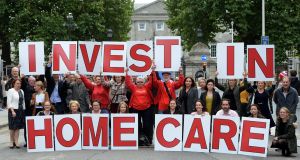 Older people spend less time in hospital when there is a good supply of home care and nursing homes in their local area, new research shows.

Increasing home care and residential care services will help reduce some pressures on hospitals, according to the study by the Economic and Social Research Institute.

However, despite the “clear link” between duration of hospital stay and the supply of these services, the number of hospital beds also needs to be increased due to long waiting lists and a bed occupancy rate that is the highest in Europe.

“Increasing the supply of home care and nursing home beds can help reduce pressure on hospitals, but it is not a panacea,” said Dr Brendan Walsh, one of the authors of the ESRI study. “Increasing supply of these services as the population grows and ages is imperative, but so too is continued investment in hospital capacity.”

Large inequalities exist between different counties in the supply of home care and residential care, and of health professionals, a previous ESRI study published last July found. Eastern counties are generally under-served, while western counties are over-served relative to the average.

Speaking on Tuesday at a seminar to discuss the reports, Áine Carroll, professor of healthcare improvement at UCD, said the health system seemed to be “relentlessly hospital-obsessed” and this “needs to be flipped on its head” to give primacy to services in the community.

An independent think-tank should be set up to “push back” against fake news stories about the health service, Prof Carroll suggested.

The media has a moral obligation to provide a balanced view of the health service “and yet they don’t”, she said.

Citing the example of the controversy over CervicalCheck, she said the State’s national cervical cancer screening programme was a “marvellous service and yet you wouldn’t know it to read the media”.

Prof Carroll said she was not just blaming the media and there were a lot of other elements to providing a network approach to changing a complex system.

Referring to the challenges faced by the health service, she said Ireland’s relationship with alcohol remained dysfunctional, though progress was being made. Meanwhile, many services were fragmented.

She said it was “completely insane” and “crazy” that more than a million people were on waiting lists.

“The key to addressing these issues is targeting. We have a real difficulty in relentlessly pursuing policies or models of care.”