Dispute centres on union representation rights and deduction of subscription 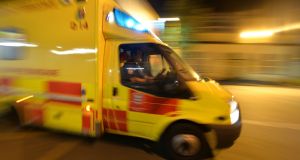 Staff in the National Ambulance Service who are members of the Psychiatric Nurses Association (PNA) are to undertake industrial action from Wednesday.

The union is in dispute with the HSE over representation rights and the deduction of union subscriptions from pay.

The staff engaging in the industrial action are members of the union’s National Ambulance Service Representative Association (Nasra) branch. The union said the branch has 500 members.

It said as part of the initial phase of industrial action, vehicles which do not comply with daily inspections will be stood down at the location and not moved to any other location. All vehicles not in compliance with health and safety legislation and HSE ambulance drugs policy will be stood down.

In addition, staff will refrain from using their personal equipment and technology for work purposes unless they are in receipt of an allowance for same. They will also only start work at official roster time.

PNA general secretary Peter Hughes said the growing numbers of ambulance service personnel – including paramedics, advanced paramedics and emergency medical technicians – “who wished to join Nasra and exercise their fundamental right to organise and join the union of their choice were not prepared to have such basic trade union rights dictated to them by the HSE”.

The HSE does not recognise either organisation for negotiation purposes for ambulance staff grades. Last July the HSE threatened to seek an injunction to prevent a previous plan for strike action going ahead.

Mr Hughes claimed that the executive was attempting to stop the work and expansion of Nasra, which was formed seven years ago. He said it wants to “force ambulance personnel throughout the country to remain in another union that they do not want to be part of”.

He said “this cannot, and will not be allowed to happen”.

Nasra national chairwoman Sinead McGrath said its members were determined not to allow the HSE to “frustrate the development of Nasra” as a legitimate branch of the Psychiatric Nurses Association.