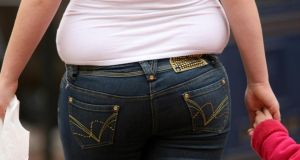 Obese middle-aged people are nearly 30 per cent less likely to develop dementia than those of a healthy weight, a study has revealed. Photograph: Anthony Devlin/PA Wire.

Obese middle-aged people are nearly 30 per cent less likely to develop dementia than those of a healthy weight, a study has revealed.

It also found that underweight people of the same age were a third more likely to develop the condition than those who had a healthy body mass index (BMI).

The new research published in the The Lancet Diabetes And Endocrinology journal contradicts findings from previous studies, which suggested that obesity leads to an increased risk of dementia.

Researchers based at the London School of Hygiene and Tropical Medicine and Oxon Epidemiology, also in London, analysed data from the Clinical Practice Research Datalink (CPRD).

The large database - which represents around 9 per cent of the UK population - contains patient information recorded during routine general practice over nearly two decades.

In total the records of 1,958,191 people with a median age of 55 at the start of the study period and a median BMI of 26.5 kg/m2 — just within the range usually classed as overweight — were examined.

They showed that within an average of nine years follow-up, 45,507 people were diagnosed with dementia.

Researchers found that people who were underweight in middle age were 34 per cent more likely to be diagnosed with dementia than those of a healthy weight.

As people’s BMI increased, the risk of dementia reduced, with very obese people - those with a BMI greater than 40kg/m2 — 29 per cent less likely to develop the condition than those in the normal weight range.

The association between BMI and dementia risk was not affected by the decade in which the participants were born, or by their age at diagnosis. Adjusting for factors known to increase the risk of dementia, such as alcohol use or smoking, made little difference to the results.

Study author, Professor Stuart Pocock, from the London School of Hygiene and Tropical Medicine, said the results suggested that doctors and the authorities needed to re-think how to best identify those at high risk of dementia.

He continued: “We also need to pay attention to the causes and public health consequences of the link between underweight and increased dementia risk which our research has established.

“However, our results also open up an intriguing new avenue in the search for protective factors for dementia — if we can understand why people with a high BMI have a reduced risk of dementia, it’s possible that further down the line, researchers might be able to use these insights to develop new treatments for dementia.”

Dr Nawab Qizilbash, from Oxon Epidemiology in London, said the reasons why high BMI might be associated with a reduced risk of dementia are not clear.

“If increased weight in mid-life is protective against dementia, the reasons for this inverse association are unclear at present. Many different issues related to diet, exercise, frailty, genetic factors and weight change could play a part,” he said.