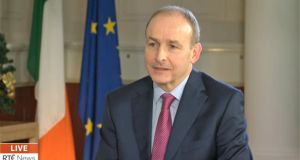 The Government will consider a recommendation from the National Public Health Emergency Team (Nphet) that inter-county travel be restricted after Christmas and before New Year’s Eve.

Nphet wants people to be asked to stay within their county boundaries again to prevent further spread of Covid-19 in light of the increase in new cases.

Under the existing plan to relax restrictions over the festive period, people were permitted to travel between counties again from Friday, allowing people to travel to see relatives and loved ones over Christmas.

If accepted, the restriction would shorten the amount of time people can spend with family and friends outside their county over the Christmas period.

Earlier, Taoiseach Micheál Martin said Nphet has recommended to Government that the period of relaxed Covid-19 restrictions be shortened to the end of the year as virus cases rise.

“The anticipated period of going from tomorrow to the 6th of January would be shortened,” he told RTÉ’s Six One.

He said the measures being recommended would involve the hospitality sector as well as reducing the number of households which can mingle during visits from three to two.

A further three deaths of Covid-19 patients have been reported by Nphet. This brings to 2,143 the total number of deaths in the pandemic.

Nphet also reported 484 confirmed cases of the disease, bringing to 77,678 the total number of cases in the Republic.

Mr Martin said he had spoken to chief medical officer Dr Tony Holohan, who was concerned that Covid-19 numbers were rising across all age cohorts.

Asked if Government would be minded to accept the recommendations, he said: “I think Government will take it very seriously...we will be in a position to make a decision on Tuesday and give people plenty of notice”.

Meawhile, Tánaiste Leo Varadkar told RTÉ’s Prime Time Cabinet was meeting on Tuesday to discuss Nphet’s recommendations, as well as advice from other sources, but that it would not be a return to Level 5.

“The kind of restrictions we would thinking about reimposing would be between Christmas and New Years would be restrictions around hospitality - essentially closing hospitality again - and limiting visits of one household to another household but not a total ban on household visits,” he said.

“For example, retail and personal services would stay open.”

He said the Government did not want to make a decision on reimposing restrictions prior to Tuesday as it gives them additional time to consider advice and to see the numbers of positive cases in the coming days.

“Bear in mind, we’d still be giving seven to 10 days’ notice to those businesses even if that decision is not made until Tuesday,” he added.

He acknowledged that the need to reimpose restrictions between New Years and Christmas is “devastating news”.

“ I know not just for the hospitality sector in particular, but also for people who had planned the season, who are looking forward to seeing people over the New Year and that may not now be possible,” he said.

“Unless the numbers stabilise over the next number of days, then we will have to bring forward from the 6th of January the point at which we need to reimpose restrictions.”

He added: “I know that’s a really hard thing to hear and a really difficult decision for people to take but if we don’t do that and wait until January 6th, the restrictions we reimpose might have to be tougher and might have to go on for longer and we don’t want that.”

Adrian Cummins, CEO of the Restaurants Association of Ireland, tweeted: “Proposed restrictions on Restaurants & Hospitality before the end of 2020 will have a devastating economic impact on Businesses & Employees”.

The reproduction number, a measure of how many other people a case infects, now stands at between 1.1 and 1.3, according to Prof Philip Nolan, chair of the Nphet epidemiological modelling advisory group.

On Thursday afternoon, there were 200 Covid-19 patients in hospital, including 31 in ICU. There were 30 additional hospitalisations in the past 24 hours.

He said the virus was spreading throughout the country, in all age groups.

“We are now getting reports of substantial outbreaks in social settings, including workplace settings, Christmas parties and funerals. I cannot stress enough how important it is to limit your interactions now. The consequences of not doing so will be exponential growth in January, a substantial increase in hospitalisations and risk to life.”

Minister for Health Stephen Donnelly has told the Dáil the reproduction rate of the Covid-19 virus has risen to between 1.1 and 1.3 from between 0.9 and 1 last week.

Mr Donnelly, describing the situation as “precarious”, said that with a rate of anything above 1.2 “the cases can rise very, very quickly”.

He said the positivity in testing is up and the referrals for PCR testing are up and that doctors are recording flu-like symptoms in their surgeries.

He warned that all the lead indicators “are all pointing to a serious increase in cases and we’ve seen the number of personal contacts rise”.

The number of contacts per person who tests positive has risen from 2.8 recent to 3.6 today.

He said that “Ireland has done the best in the western world as a nation and as a body of politics in working together to drive the virus down and keep people alive.

The Minister who was opening a Dáil debate on the Covid-19 taskforce, said he had had a long conversation with the Chief and Deputy Chief Medical Officers before the debate and it was “very sobering”.

He said Ireland was in the privileged position of seeing friends and family at Christmas and he appealed to the public to act on the advice of Dr Ronan Glynn to reduce the number of contacts they planned to have over the festive season.

Earlier, the head of the HSE Paul Reid urged people to protect themselves over the Christmas period, saying that would be the best present they could give to Ireland’s health system.

Chief medical officer Tony Holohan on Wednesday said there were “significant and concerning indicators that this disease in moving in the wrong direction.”

He said these include an increase in positivity rates, and the 5 day moving average has now increased to 339 new daily cases while the seven day incidence rate is 48.7 per 100,000.

“These trends are all the more troubling because of the delicate and precarious situation we are in - as a country, we are heading into a period of potential widespread inter-household and inter-generational mixing,” he said.

On Wednesday it was announced that a further 431 new Covid-19 cases and six further coronavirus-related deaths had taken place in the State.

On Thursday morning Mr Reid urged people to exercise caution over the Christmas period and keep their social contacts to a minimum.

“We want people to look forward to Christmas, it is important for their mental health,” he said.

But he added that he was concerned that there would be “an explosive concoction” that would have a major impact after Christmas which is peak time for demand on health services.

Restriction on travelling outside the county where you live will be lifted on Friday and Mr Reid called on people to keep contacts and household visits to a minimum.

Restrictions had been eased with the aim of giving people “some measure of relief” but the public needed to continue to practice measures such as mask wearing, hand washing and social distancing, Mr Reid told RTÉ’s Morning Ireland.

He said he was concerned about the lag effect. He did not want to have to curtail the easing of restrictions earlier. It was up to everyone to modify their behaviour so that did not have to happen.

He also said that the HSE would offer whatever supports it could to Northern Ireland and they were monitoring the situation there closely.

In response to a question about the possibility of closing schools this week until after Christmas following a number of outbreaks in schools, Mr Reid said that keeping schools open was important for the welfare of children. Positivity rates in school were much lower than in the community, so they should remain open, he said.

The situation has also deteriorated in Northern Ireland where patients were being treated in rows of ambulances outside hospitals because of the lack of beds and increasing incidence of the virus.