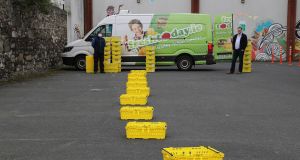 “They have been hugely appreciative,” said McCormack, after about 100 families arrived in the car park of the school on North Brunswick Street to collect packages of bread, yoghurt and cereal over the course of the morning.

“We don’t ask parents about their employment status, but we know many have lost their jobs and taken financial hits and are struggling to get by even during the good times.”

Since the shutdown, the education system has been scrambling to find ways to ensure vulnerable children still have access to school meals they have come to rely on in about 1,500 schools.

Last week the Government confirmed that funding will continue for the school meals programme in recent days and issued guidelines to schools and meals providers on how to do this.

St Paul’s or “The Brunner” , like many is offering take-away parcels of food for collection.

There may still, McCormack worries, be a stigma around being seen queuing up in public to collect food.

By contrast, the school meals programme is universal and all children can benefit, whether they need it or not.

That’s why St Paul’s is in talks with An Post and its schools meal provider Freshways to see if food parcels can be delivered to families’ doors.

Ray Nangle, Freshtoday chief executive, has said it will explore all available avenues to assist families.

“With current closures, families are facing extraordinary challenges. We have had calls from schools across the country desperately seeking food for students in dire need,” he said.

“We will be working tirelessly to ensure that a weeks’ supply of goods will be delivered to Deis schools for distribution. This will alleviate not only financial difficulties, but also help in restricting shopping times and community exposure.”

The impact since the programme started three years ago, says McCormack,has been transformative. Many families, he says, now come to rely on it as a vital source of nutrition.

“It’s improved school attendance and pupils’ behaviour since we introduced it. There’s no doubt about the need for it. There are kids where, in first or second year, they are physically smaller and undernourished,” says McCormack.

“There are children in family homes where they lack furniture and there’s not much in the cupboard. It’s a hidden poverty which still, very much, exists.”

As parents arrived to collect food parcels this week, in line with social distancing measures, there wasn’t much scope to engage in chat.

But he said the message they received on email and text were hugely appreciative.

“On a human level, this is a school community is sending our families a message that we understand the very real emotions around what people are going through; we haven’t forgotten you. We’re in this together,” McCormack says.

“We didn’t have a chance to stop and talk, but we got great feedback online. Parents were delighted - it was good to see that response.”