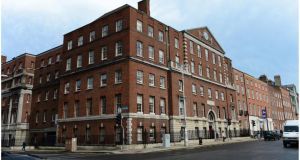 The National Maternity Hospital in Holles Street: It has been trying to find a new home for decades. Photograph: Bryan O’Brien

The row over the transfer of the National Maternity Hospital to a site owned by a religious order was the biggest story in Irish health this century, until Covid-19 arrived.

Three years ago, the controversy convulsed the political system and sparked spontaneous protests outside the Department of Health after a former NMH master, Dr Peter Boylan, said the new hospital would be controlled by the Catholic Church.

Boylan also argued the new hospital would lack independence and expressed fears that the practice of appointing an obstetrician as “master” of the maternity hospital (instead of a chief executive) was under threat.

The NMH has been trying to find a new home away from the well-worn corridors of Holles Street in Dublin city centre for decades. A previous plan to relocate to the perimeter of the St Vincent’s campus came to nothing when the State-owned premises was assigned to the IDA instead.

Finally, in 2012, the project got the go-ahead, but on a confined site in the middle of the St Vincent’s campus. The NMH wanted to guard its independence, but how to do so in the middle of another hospital six times its size? And what about the fit between a Catholic adult hospital and a maternity hospital offering women’s reproductive services?

Governance and clinical independence issues were fought out in a turf war between St Vincent’s and the NMH in 2016. Industrial relations troubleshooter Kieran Mulvey brokered an agreement between the two hospitals, which provided for each to nominate four directors to the company running the new hospital. There would also be a ninth independent director, who would be an international expert in obstetrics; various safety locks were laid down to protect the interests of the parties, including a “golden share” for the minister for health.

The Mulvey deal seemed to resolve the issue, and design of the new hospital began.

The issue lay dormant until the following year, when Boylan raised the spectre of church control. The holding company for the new hospital would be a subsidiary of St Vincent’s, which in turn was owned by the Religious Sisters of Charity. Ownership of the hospital once it moved was being “gifted” to the nuns, it was argued.

Seen through the prism of church versus State, this “revelation” provoked huge debate in a society with a pent-up hunger for change and where the legalisation of abortion was coming on to the agenda. Government assurances about the safeguarding of independence cut little ice.

In May 2017, the Sisters of Charity announced they were pulling out of involvement with St Vincent’s. The nuns, with an average age of 81, had for some time been mulling an end to an association with healthcare stretching back almost two centuries.

Again, it seemed the controversy had been put to bed. Then it became clear the congregation required Vatican permission for the transfer, which is something Boylan predicted would never happen.

The Sisters of Charity applied for permission to “alienate” (transfer) their interests in St Vincent’s. Vatican sources say there was internal opposition to the move but Archbishop of Dublin Diarmuid Martin played a central role in support of the order.

Earlier this month, that letter of grant came through. In granting the order’s petition, the notice of assent stated “the provisions relating to the validity and lawfulness of alienations, found in Canons 638-639 and Canons 1292-1294 of the Code of Canon Law and in Proper Law, are to be observed”.

In a statement, the Sisters of Charity seized on the same verb that was used against them in 2016 by saying they intended to “gift” their lands at St Vincent’s “to the people of Ireland” for the new project.

The various interests of St Vincent’s – including a public and private hospital on campus and a hospital in Dún Laoghaire – would now be owned by a new “independent, charitable body” to be called St Vincent’s Holdings CLG.

A CLG is a type of structure – a company limited by guarantee – commonly used by sports clubs, charities and other non-profit organisations.

Though the question of Vatican assent had been answered, Boylan’s concerns have not been assuaged.

He questioned whether the order was attempting to put in place a vehicle known as a “public juridic person” (PJP), which has been used in other contexts where Catholic congregations facing terminal decline in their numbers have sought to ensure a lasting influence.

In 2016, for example, the Sisters of Mercy transferred control of the Mater hospital to a PJP. Its mission statement refers to participating in the “healing ministry of Jesus Christ”.

A spokeswoman added: “We have always been clear that all medical procedures permitted under Irish law are provided in our hospitals and will be provided in the new NMH.

“Once the entity is set up and the nuns have handed over the property, the holding will be an entirely independent secular civic body controlled solely by Irish law.”

Could there be some other way by which a Catholic influence could be imposed on the maternity hospital even after the Sisters of Charity have exited the scene legally? Both Boylan and Labour Senator Ivana Bacik have queried whether there is a wider significance to the reference to specific sections of canon law in the Vatican letter of grant.

A canon lawyer who has written an assessment of the letter of grant describes these paragraphs as “boiler-plate”.

“They’re a checklist of practices and procedures, permissions and precautions to be observed where church property is being alienated,” says the lawyer, who does not wish to be named in order to avoid involvement in a “public spat”.

“They don’t limit or inhibit the Sisters from proceeding with the planned sale to St Vincent’s Holdings, quite the opposite,” they added.

“And there is nothing that could be construed as importing into the onward proposed alienation, either overtly or covertly, a stipulation that church canon law, doctrine or teaching much be observed by SVH or the proposed NMH.”

Boylan says he remains sceptical. Is he prepared to give the benefit of any doubt to the nuns, who have after all announced their exit and then successfully sought permission to do so from the Vatican?

“You have to parse everything they say,” he says. “They keep saying things that transpire to be not actually entirely true. In their latest statement, for instance, they said they were gifting the site to the people of Ireland. Then it transpires it is being transferred to a private charity.”

In response, the Sisters of Charity said this was a reference to what would happen if the holding company went into liquidation. “Its surplus assets would be vested with the Charities Regulator and used for future healthcare purposes with similar values, to benefit the people of Ireland.”

Eloquent and temperate, Boylan commands respect across different areas, even as he engages in areas such as canon law that are outside his normal expertise.

“I’d trust Peter greatly on these issues and I’d agree with his call to make all the correspondence available,” says a senior medic and former colleague. “I’d also ask about the extent of the private facilities being put into the new NMH.”

“I think the nuns are in a bind on this,” says Michael Somers, a former board member of St Vincent’s. “It would seem the Vatican wants them to be compliant with canon law, and to uphold the teaching of the Catholic Church, in how they transfer the land.”

But the canon lawyer sees no evidence of a Machiavellian conspiracy in the Vatican permission. “There is no tentacle, there’s no string, there’s no puppeteer here.

“There will not exist any conduit, any vehicle, any structure or provision under which they can be tied to the doctrine teaching or law of the Catholic Church. There won’t be; it won’t exist.”

And while he has soldiered against the proposed move, the current master of the NMH, Prof Shane Higgins, and three former masters have publicly welcomed the nuns’ announcement and restated their belief that the new hospital will enjoy full independence in the provision of services.

One of the signatories of their letter is former NMH master Dr Rhona Mahony, who like Boylan campaigned for a Yes vote in the abortion referendum in 2018 (she is also his sister-in-law).

Can they all be wrong and he right?

“They’re satisfied because they’re keen to have the hospital,”Boylan responds. “I don’t think they’ve thought through the consequences.

“There is no problem in cardiology or orthopaedics when these are run by the religious. They’ve made a fantastic contribution to healthcare, but it’s very different when it comes to women’s reproductive healthcare.”

The memorandums and articles of association of the new St Vincent’s holding company will show whether any attempt is being made to impose a Catholic ethos, he agrees. These documents are likely to be lodged shortly with the Companies Office and the Charities Regulator.

While the arguments drag on, greater threats to the project are emerging. No one has said what the current projected cost is but it is likely to be more than double the last estimate of €300 million. The completion date has been pushed back to 2024. The other two maternity hospitals in Dublin have arguable cases for relocating to new sites and could come up the pecking order should the issues at St Vincent’s prove insuperable.

The canon lawyer believes Dr Boylan should be celebrating a famous victory. “The truth of the matter is, they’re past the finish line now, Peter and his supporters. The nuns have run up a white flag on this, and so has the Holy See.

“What he set out to accomplish was a situation where the new National Maternity Hospital would under no circumstances, even though it was to be located in St Vincent’s, have any connection whatsoever with the Catholic Church, or its teaching or canon law. That’s the outcome now, plain and simple.”