Funding of €6m to find chemicals that may damage female fertility 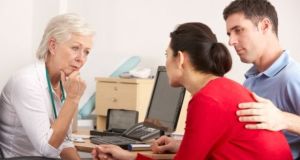 The test will search for chemicals that can interfere with hormones and are found in everyday products such as plastics, air fresheners and cosmetics. Photograph: Getty Images

Queen’s University Belfast is to begin developing a test to identify chemicals that may prove damaging to female fertility.

The university has been awarded €6.1 million jointly with Vrije Universiteit in the Netherlands for research to be undertaken alongside 11 other institutions.

Once developed, the test will search for “endocrine disrupters”, chemicals that can interfere with hormones and which are found in everyday products such as plastics, air fresheners and cosmetics.

Without such dedicated tests, it is difficult to gauge the potential damage caused by chemicals on humans, animals and the environment.

“There is surprisingly limited knowledge on this issue. We will investigate how exposure to endocrine disrupters during different hormone-sensitive phases in a woman’s life such as the foetal, puberty, and adult stages, can ultimately affect her fertility,” said Dr Lisa Connolly at the Queen’s University Institute for Global Food Security.

“It is only through developing a test to better understand how these chemicals affect fertility that we will then be in a position to offer solutions.”

In humans, endocrine disrupters can affect fertility and brain development. Animals can be affected in the environment - for example, male fish are increasingly carrying female eggs caused by the release of endocrine disrupters released by waste-water treatment plants.

The €6.1 million grant is part of a wider research project funded by the European Research and Innovation programme Horizon 2020.