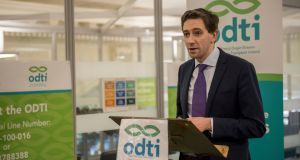 Minister for Health Simon Harris said he did not rule out permitting doctors to work in privately-owned facilities despite Sláintecare calling for a separation of private practice and public hospitals. Photograph: Brenda Fitzsimons/The Irish Times

Thousands of additional beds need to be provided at acute hospitals and community facilities to meet demand for services in the coming years, Minister for Health Simon Harris has conceded.

In an interview with The Irish Times, the Minister said a review of bed capacity which is currently under way would make recommendations on the requirements up to 2031 based on a growing and ageing population.

Even after the implementation of planned reforms of the health system, including major shifts towards more work being carried out in primary care, “you can take it with a degree of certainty that it is going to require thousands of more beds in acute hospitals and in the community”, he said.

The Minister also said patients should be told by the HSE if consultants who are providing their care in public hospitals do not have specialist training or qualifications and are not on the Medical Council’s register of specialists.

The HSE has acknowledged that more than 80 consultants employed in public hospitals are not on the specialist register.

On plans to separate private and public practice in public hospitals, Mr Harris said this would require negotiating a new contract with hospital consultants, many of whom have contractual rights to treat fee-paying patients in State-owned facilities.

He also indicated that this would raise issues about remuneration for consultants.

While the Government’s healthcare reform blueprint, Sláintecare, calls for such a separation of private practice and public hospitals, Mr Harris said he did not rule out permitting doctors to work in privately-owned facilities.

The Minister rejected criticism that he has been too slow in implementing the reforms proposed in the Sláintecare document, which has broad cross-party support in the Oireachtas.

Critics have argued that the new office to lead the implementation of the plan has not yet been established or its chief officer appointed and that there was no sign in the budget for 2018 of the proposed €3 billion transitional fund to pay for necessary infrastructural development to underpin the new arrangements.

Mr Harris said some deadlines for implementing Slaintecare were “unrealistic”.

“The idea that the Sláintecare committee would want me to identify an amazingly talented person to lead a programme of reform on a scale which never before has been done in Ireland and we would have that person in situ by October is not the way the world works.”

“The plan gets presented in June and everything is magically presented by October is not how the world works. Getting the foundation is so important.”

The Minister said there was an executive search under way in the Public Appointments Service to find a person to lead the Sláintecare implementation office.