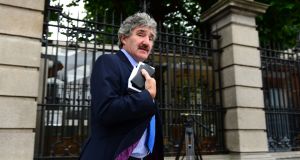 The Government has “no plans” to continue using a mobile catheterisation lab at University Hospital Waterford after mid-February despite a campaign for improved cardiac services in the region.

The mobile lab was deployed in September to reduce waiting times for certain heart procedures at the hospital in Waterford, which caters for much of the population of the southeast, but this initiative is to end on February 14th.

“There are currently no plans to extend this contract at University Hospital Waterford,” a spokesperson for the South/South West Hospital Group said.

A sister of a man who died in an ambulance after being transferred from the hospital because necessary cardiac services weren’t open at the weekend, has hit out at the ongoing delay in providing 24-7 facilities for heart patients in Waterford.

Tom Power (40) died in June while en route from Waterford to Cork, shortly after he had presented himself at University Hospital Waterford with chest pains.

As it was a Sunday, the catheterisation laboratory (cath lab), used to diagnose and treat certain cardiac conditions such as heart attacks, was closed and he was sent by ambulance to Cork University Hospital, but died 35 minutes into the journey.

His death highlighted an ongoing campaign by people in the southeast for a second cath lab to be installed at the Waterford hospital and staffed on a round-the-clock basis so emergencies can be dealt with.

“It’s nearly the Calcutta of Ireland, ” Mr Power’s sister Catherine said in relation to the southeast and its cardiac services. “They’re depriving the people in so many ways. We just want the cath lab built, in Tom’s memory. He should be here, and he’s not.”

A review of cardiac services announced last year by Minister for Health Simon Harris, to include the need for such facilities in the southeast, continues.

The one permanent lab will have its opening hours increased 20 per cent from February, with additional funding of €1 million for 2018, and staff recruitment has already started.

However, John Halligan, a Minister of State and Independent TD for Waterford, said that while the mobile lab had reduced wait times, particularly of more than six months, there were still 395 new cases, or people waiting up to three months for cath lab procedures, in November.

These numbers were sufficient “to warrant two labs running concurrently”, Mr Halligan said. He has canvassed for several years for round-the-clock cath lab services in Waterford and said the mobile lab had resulted in “a dramatic reduction” in waiting times.

The latest figures obtained this month show the amount of people waiting three to six months for treatment dropped from 235 to 87 between September and October, and to 63 by November. Those waiting six to eight months went from 50 in January to three in November, and there were similar drops for longer waiting periods.

“You’re talking about a massive population who don’t have a cath lab on their doorstep. In other countries it’s just another thing, but over here it’s sacred, only the few will get it, in Cork, Galway, Dublin and Limerick. In the southeast, [it’s open] only nine-to-five.”

She and other family members have been left “lonely and sad” by Tom’s death at such a young age, she said.

“Losing Tom is like having a door shut. It’s just incredible what such a death can do to a family. They’re all shook [his family]. It hasn’t really hit us yet.”

Data from the mobile cath lab will be fed into the National Review of Specialist Cardiac Services.

In a statement Mr Halligan wrote, after a meeting with Mr Harris, that “the Minister also acknowledged the reduction in wait times and the demand for increased services at University Hospital Waterford by Oireachtas members, regional clinicians and campaigning groups”.

“He committed to patient voices being front and centre in the review process,” Mr Halligan said.

Meanwhile, family members of Tom Power organised a memorial walk for St Stephen’s Day from University Hospital Waterford along the Cork Road out of Waterford, the “last road he was on before he died, to highlight to our Government how bad things really are,” as his sister put it.