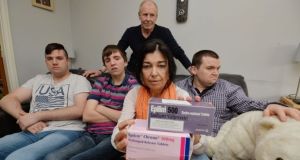 Karen Keely with her partner Kevin and her three adult sons Lee, Lorcan and Harry, who have birth defects after she was prescribed Epilim throughout her pregnancies. Photograph: Alan Betson

An Irish woman has given evidence at a hearing in London about the harmful effects of an epilepsy drug on her children.

The agency is reviewing what measures are needed to warn women of the risks of the drug, which is known to cause physical deformities in children whose mothers take it during pregnancy, as well brain damage and problems such as autism.

Ms Keely told the hearing that the risks of the drug “have been known for many years”.

Ms Keely said her three sons, Lee, Lorcan and Harry, all had birth defects after she took Epilim, a trade name for sodium valproate, while pregnant.

She said: “Two of my three boys require life-long care and will never live a normal life, will never be able to have children or get married.

“The effects of sodium valproate have been unbearable.

“I have been mourning my children since the day they came into my life and I’m determined to not let this injustice happen to other families in the same way that it has happened to mine.”

Experts also told the hearing that warnings over the drug, which has harmed thousands of children worldwide, should have been made in the 1970s.

Sanofi, which manufactures the drug, has said it has always been transparent with regulators about the risks of the medicine.

Catherine Cox, from the UK’s Foetal Anti-Convulsant Support Association, said warnings on valproate should have been issued to women more than 40 years ago.

“A decision was taken not to publish them despite warnings by the manufacturer.”

She said information given to women on the issue over the years had been “sparse and inconsistent” and most doctors and specialists “were unaware or chose not to give out the information”.

She said official figures on the number of children in the UK harmed by the drug — which some put at 20,000 — may never be known.

Sodium valproate, which is marketed under several names, is prescribed for epilepsy, migraine and bipolar disorder.

The most up-to-date advice from the UK’s Medicines and Healthcare products Regulatory Agency (MHRA) says the drug should not be given to women of childbearing age or during pregnancy unless alternative treatments are ineffective or not tolerated.

Documents from July 1973 show that British regulators decided not to warn patients directly of the risks, for fear it “could give rise to fruitless anxiety”.

Health professionals were told at the time: “This compound has been shown to be teratogenic in animals, meaning it could harm the human foetus.”

But the UK’s Committee on Safety of Medicines, which existed before the MHRA, said the warning should “not [go] on the package inserts, so that there would be no danger of patients themselves seeing it”.

The licence issued in 1974 for Epilim said doctors and pharmacists should prescribe it only in severe cases of epilepsy or where there was no alternative.

Clare Pelham, from the UK’s Epilepsy Society, said women needed to be given the right information to make an informed choice.

She said the charity wanted to see a national register created of women taking the drug.