Irish health spending contracting faster than any other country except Greece 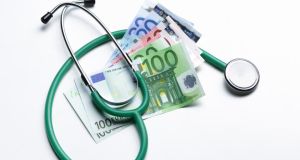 Irish health spending is contracting at a faster rate than any other country except Greece, having grown at record levels during the boom, new figures show.

Spending on the health system fell by over 5 per cent a year in 2009-2011, driven by Government efforts to reduce the large budgetary deficit, according to OECD Health Data 2013. In contrast, it grew by almost 9 per cent annually during the period 2000-2009. Total health spending, at 8.9 per cent of gross domestic product, is slightly under the OECD average, but spending per head of population remains above average. Ireland spends more on each citizen’s health than the UK, Iceland, Japan and New Zealand.

Private sources
While the public sector continues to be the main source of health funding, one-third of funding now comes from private sources as a result of increased charges levied on patients for drugs and appliances.

The OECD figures show Ireland has fewer doctors than most European countries, though more per head of population than in the US or Canada. Ireland has a relatively high number of nurses, though the report warns about comparing data as nurses and midwives can be categorised differently.

Life expectancy in Ireland is a half-year above the OECD average, but up to two years behind Switzerland, Japan and Italy. With 29 per cent of the population smoking, Ireland is well above the average 21 per cent.

Alcohol consumption, while it has declined, is also among the highest in OECD countries, at 9.4 litres per person per year.