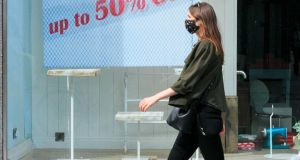 With more mask-use, the number of additional Covid-19 deaths could be kept to under 400, according to the Institute for Health Metrics and Evaluation, based at the University of Washington. Photograph: Gareth Chaney

Ireland could suffer another 1,200 Covid-19 deaths by the end of the year if use of face masks remains at current levels, according to a forecast by US academics.

The number of additional deaths could be kept to under 400 if mask-use rises to near universal levels, according to the Institute for Health Metrics and Evaluation (IHME), which is based at the University of Washington.

Daily case numbers could rise to almost 8,000 and the health service would be short 400 ICU beds in the worst-case scenarios of IHME’s modelling, which assumes a continuing lifting of restrictions.

The research predicts 2,940 deaths in Ireland by January 1st if mask-use remains at current levels. In a best-case scenario, where more than 95 per cent of people used masks, there would be 2,180 deaths, compared to the 1,777 deaths so far recorded.

By the end of the year, it is forecast that Ireland would need 1,037 out of the 1,573 available hospital beds to treat virus patients. Some 454 ICU beds would be needed with only 53 available, and 433 ventilators would be required.

Globally, IHME predicts 2.8 million Covid-19 deaths by the end of the year, up from the current 1.9 million, assuming mask-use and other mitigation measures remain unchanged. By December, up to 30,000 people could be dying daily worldwide, it says, adding that 770,000 lives could be saved through mask-wearing, social distancing and other protective measures.

“These first-ever worldwide projections by country offer a daunting forecast as well as a roadmap toward relief from Covid-19 that government leaders as well as individuals can follow,” said IHME director Dr Christopher Murray.

“We are facing the prospect of a deadly December, especially in Europe, Central Asia and the United States. But the science is clear and the evidence irrefutable: mask-wearing, social distancing, and limits to social gatherings are vital to helping prevent transmission of the virus.”

Last April, IHME’s view that Ireland’s death rate had peaked was criticised as unreliable by Irish officials. However, it turned out to be largely accurate, as did its projection of 150,000 deaths in Europe during the first surge of the pandemic. So far, deaths on the continent stand at 182,000.

The Department of Health did not respond last night to a request for comment on the latest forecasts.

No link between Limerick cement plant and respiratory deaths rate – watchdog 20:22
Demand for mental health support doubles in some universities 20:16
Coveney in Paris insists Irish fishing industry central to Brexit talks 20:02
Care homes and Covid: ‘The first line of defence is going to be a wall of vaccinated staff’ 19:55
Man (21) sentenced to community service over crash that killed friend 19:36

4 Q&A: What we know and don’t know about how Covid-19 vaccines will work in Ireland