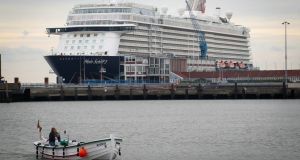 Some 81 per cent of those who tested positive (108 people) on the cruise ship showed no symptoms of the virus. File photograph: EPA/Focke Strangmann

A study carried out among passengers on board an isolated cruise ship in the Antarctic has found the prevalence of the “silent symptomless” coronavirus infection may be much higher than previously thought.

An article published today in the journal Thorax reveals more than eight out of 10 of the passengers and crew on board the cruise ship who tested positive for coronavirus, also known as Covid-19, showed no symptoms.

The WHO has previously said that only one per cent of Covid-19 patients are asymptomatic.

The study was carried out among 128 passengers (mostly from Australia and New Zealand) and 95 crew on board a ship which set sail from the city of Ushuaia in Argentina in mid-March for a planned 21-day cruise of the Antarctic after the World Health Organisation (WHO) had declared Covid-19 a global pandemic.

Those researching the prevalence of silent Covid-19 symptoms were also on board the vessel, which was set to follow a similar route to Ernest Shackleton 1915-1917 expedition.

The ship had no outside human contact for 28 days after its departure and thus was totally isolated, notes the report.

Passengers booked on to the cruise who had passed through countries in the previous three weeks where Covid-19 infection rates were already high were not allowed to board. Everyone else had their temperature taken before embarkation while hand-sanitising stations were “plentiful” aboard the ship, particularly in the dining room, according to the study.

On the eighth day of the cruise the first case of fever was reported and immediate infection control measures were adopted including confining passengers to their cabins and distributing surgical masks to everyone. Daily room servicing was stopped and any crew member who came into contact with a sick passenger had to wear personal protective equipment. Meals continued to be delivered to cabins three times a day.

As Argentina had closed its borders, the ship docked in the Uruguayan capital of Montevideo on day 13 of the cruise and eight passengers and crew were subsequently evacuated to hospital for respiratory failure. Four of these were intubated and ventilated and one person died of the virus.

The remaining 217 passengers and crew were swab tested for Covid-19 on day 20 with nearly 60 per cent (128 people) testing positive for the virus.

Some 81 per cent of those who tested positive (108 people) showed no symptoms of the virus.

These results indicate the prevalence of Covid-19 on affected cruise ships has been “significantly underestimated”, conclude the authors who have called for all passengers on board other cruise ships to be monitored after disembarkation to avoid the further spread of the virus.

On 10 occasions, two passengers sharing the same cabin on the Antarctic cruise didn’t have the same test result. This may have been because current swab tests result in a “substantial number” of false negative results, according to authors Prof Alvin Ing from the Macquarie University Hospital in Australia and Dr Jeffrey Green from the Royal Australasian College of General Practitioners.

Secondary Covid-19 testing among cruise ship passengers is needed given this potentially high rate of false negative results, they added.