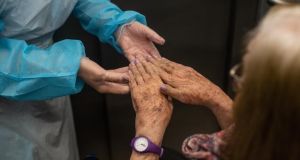 Over half of all Covid-19 deaths in Ireland to date have been recorded in long term residential care settings. Photograph: David Ramos/Getty

Nursing home residents aged 70 and over are more likely to contract Covid-19 than the same age group in the general population and face a greater prospect of death, a new report has found.

A study of cases to May 6th highlights a fatality rate in the general population of 17 per cent, but this rises to 21 per cent for those in long term residential care settings (LTRCs).

The analysis is contained in the Department of Health report Overview of the Health System Response to Date, examining a sector that has come under increasing scrutiny in recent days for the way in which the virus has been handled. Over half of all deaths in Ireland to date have been recorded in such facilities.

“In summary, those in LTRCs are more likely to contract COVID-19 than those in the same age in the general population, but death rates are similar in both groups,” it says.

In the general population, those in that age cohort have been urged to “cocoon”, or shut themselves away from any contact with the outside world.

The snapshot of case data showed an overall incidence rate of 2.4 per 1,000 in the general population compared to 10.7 in those aged over 70 years.

By early May, 1 per cent of all people in that age category had been confirmed as having Covid-19. The incidence rate among residents of LTRC facilities generally was found to be approximately 45 times greater than the general population.

The document also lends some insight into the manner in which the virus spread aggressively through such settings.

Characteristics of LTRC facilities in Ireland that make them high risk for Covid-19 outbreak, it notes, include congregated settings often with shared rooms; high levels of contact between people; and a lesser ability to ascertain symptoms among people with neurological conditions such as dementia.

It also points out that in order to provide continuity of service with absent staff, agency or temporary workers are brought in and in turn can spread the virus into other care homes.

The report also examines early guidance on the transfer of people from acute hospitals to nursing homes, issued on March 10th.

In cases where a patient was identified as a “possible close contact” of a known Covid-19 positive case, it was recommended they be accommodated in a single en-suite room for 14 days after transfer.

Patients with possible symptoms were not to be transferred unless a Covid-19 test was negative and even then were to be accommodated in single room for 14 days.

Those who tested positive in an acute hospital were not to be transferred until they had completed 14 days of isolation and had tested negative for the virus. This guidelines were widely circulated.

“At this stage of the pandemic it is considered that if the protocols set out in the guidance were adhered to…the risk of transfer to and subsequent spread of COVID-19 to LTRC facilities would have been low, albeit not impossible given the emerging evidence with regard to asymptomatic and atypical presentations of COVID-19 in some older people,” it said.