Altruistic organ donation should be introduced in Ireland, charity says

Half a dozen people a year referred to North for altruistic organ donation, says IKA 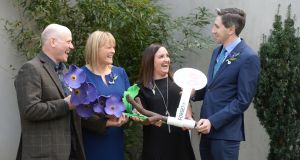 Susan Mulligan, (2nd right) from Castlerea, Co Roscommon is undergoing dialysis treatment for two and a half years pictured with Mary Verbruggan from Oughterard in Galway who underwent a living donor kidney transplant thanks to her donor brother Tom Gleeson (left), pictured with Minister for Health Simon Harris. Photograph: Dara Mac Donaill /The Irish Times

People who want to donate organs altruistically for transplantation are being forced to go to Northern Ireland because of the lack of a dedicated service here, a charity has claimed.

The Irish Kidney Association says it is referring up to half a dozen people a year to the North because there is no provision in the Republic for altruistic organ donation.

With the number of living donors falling substantially last year for the first time in a decade, it says Ireland should follow the lead of other European countries by setting up a service to cater for the needs of the growing number of dialysis patients.

Forty living donors provided organs under the transplantation programme last year, down from 51 in 2017 and the first substantial fall since records began. At present, most living donor transplants occur within families.

Minister for Health Simon Harris marked the beginning of Organ Donor Awareness Week on Tuesday by announcing improvements to the expenses paid to living donors. This includes a childcare cost allowance of up to €5,000, the payment of up to €10,000 to self-employed donors for staff costs and the payment of expenses to living liver donors.

It has queried Mr Harris’ plans to introduce an opt-out system for organ donation, saying action on the other measures it proposes would do more to increase the supply of donor organs.

Speaking at the launch of Organ Donor Awareness Week, Mr Harris said on Tuesday he intends to press ahead with the opt-out system, which will form part of the Human Tissue Bill to be published next month.

The IKA says doctors should be able to access information about the almost one million people whose willingness to donate organs is indicated on their driving licences.

“As the Minister has already proposed the introduction of an opt out registry, it would be a huge missed opportunity not to utilise the existing record of people who do wish to be organ donors,” says IKA chief executive Mark Murphy. “We have this data, and we’re doing nothing with it.”

In addition to the living donations, the organs of 81 deceased people were transplanted in 2018, resulting in 234 organ transplants.

About 550 people are currently waiting for a kidney, heart, lung, liver or pancreas transplant.

Mr Murphy urged the public to carry an organ donor card and to have a conversation with their families about their donation wishes after death.